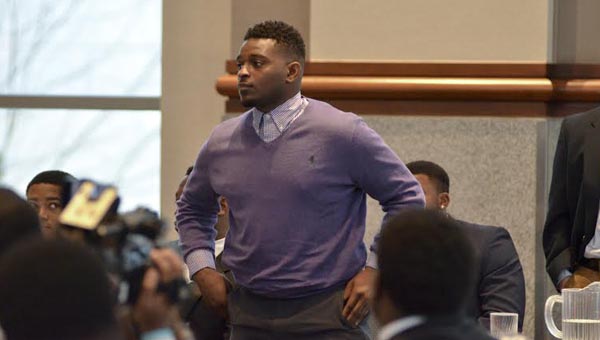 Calera’s ShaKeith Tyes stands after being recognized for being a nominee for AHSAA Class 5A Back of the Year at the ASWA Mr. Football Banquet on Jan. 14. (Contributed/Drew Granthum)

MONTGOMERY- Calera running back ShaKeith Tyes attended the Mr. Football banquet held in Montgomery on Jan. 14 to be honored as one of the top football players in the state for the past season.

“There are 24,000 kids that play high school football in this state, and only 42 get invited to that banquet,” Calera head coach Wiley McKeller said. “Shakeith was our third guy in three years to get invited, which is very cool for us.”

The Mr. Football banquet, which is put on by the Alabama Sports Writers Association, awards one lineman and one back in each class, as well as declaring an overall winner. Kerryon Johnson of Madison Academy was named Mr. Football at the banquet, and will attend Auburn University in the fall.

Tyes was attending the banquet as a nominee for AHSAA Class 5A Back of the Year, and currently hold offers from a number of mid-major schools, and has not yet decided where he will play his college ball.

In his senior season with Calera, he racked up 2,268 rushing yards with 30 touchdowns, as well as 358 receiving yards and five more touchdowns. He finished the season with 37 total touchdowns, which put him at 73 for his career, surpassing last year’s Mr. Football runner-up and current Alabama running back Ronnie Clark for most all-time at Calera.

“He’s a great, great guy,” McKeller said. “He was the guy for us on the field this year too. He’s built like a truck, and we used him as much as we could.”

Calera used Tyes on their way to finishing the season with a 10-2 record.

Montevallo men get back on track with win at Young Harris

Monetvallo’s Skykeem Jackson, shown here in action against Alabama, recorded his first double-double of the year as the Falcons won... read more