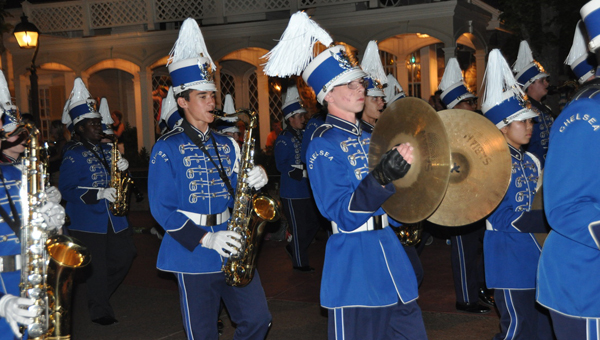 The CHHS Band will be marching in Governor Robert Bentley’s Inauguration Parade in Montgomery on Jan. 19. (Contributed)

CHELSEA—While their classmates will celebrate Martin Luther King Jr. Day with a day free of school and work, the 180 students in the Chelsea High School Marching Band will bring their talents to Montgomery and march in Governor Robert Bentley’s Inauguration Parade.

The CHHS band was invited to perform in the parade by State Senator Slade Blackwell, R-Birmingham. The invitation was a surprise and an honor, CHHS Director of Bands Dane Lawley said.

“(The invitation) came the week before Christmas break,” Lawley said, adding the band enthusiastically accepted the invitation to perform at the Inauguration Parade and all the band’s expenses are being funded by Blackwell.

The band will play “Alabama Jubilee” for the Jan. 19 parade, an “old song” selected for its “Alabama theme,” Lawley said.

Although in the midst of concert band practices, the CHHS musicians have met each Thursday to march and rehearse for the parade.

“They’re pretty excited,” Lawley said of his students. “They’re excited about giving up their off day to go march in the Governor’s parade.”

The upcoming trip to Montgomery will not be the CHHS Band’s first experience marching in an inauguration parade. The band was selected to participate in Bentley’s first Inauguration Parade four years ago.

Even so, the experience will be a first for all but one of the current CHHS band members, and will be a memory they will cherish for years to come, Lawley explained.

“It (the Inauguration Parade) happens every four years, but there’s no guarantee in the next four years (that we will be there),” Lawley said. “People still talk about that (experience) when they come back to school.”

The Hoover Board of Education hired the AASB to lead the search for a new superintendent during a Jan. 16... read more