Kingwood Christian gets big win against No. 2 Tuscaloosa Academy 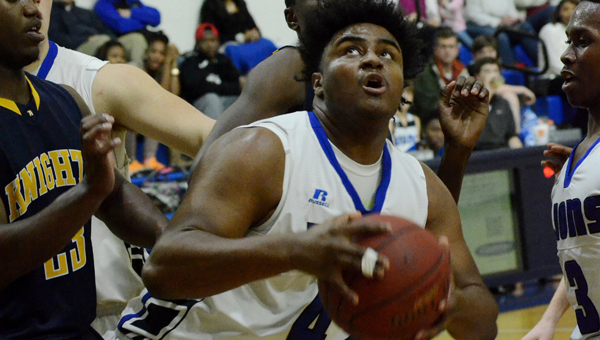 ALABASTER- In an AISA contest between two top-10 teams in 3A, the ninth ranked Lions of Kingwood Christian School defeated second-ranked Tuscaloosa Academy by an overtime score of 57-53.

“Senior leadership played a big part,” Coach Danny Davis said. “We have missed 35-40 points in the last four games due to injury with two of the best guards in my opinion in the state.”

Kingwood came into the game on a three-game losing skid, and were in good spirits after their tough victory, according to Davis. “Our motto, ‘work hard no excuses’ was in our hearts tonight.”

After a close first half that saw Kingwood take a 23-18 lead, the Lions looked to be in good position to upset the second-ranked Knights. Kingwood went on a 15-9 run that encompassed the whole third quarter to take a commanding 38-27 lead going into the fourth.

Tuscaloosa Academy showed why it is an AISA powerhouse in the fourth by holding the Lions to just 10 points for the whole quarter, while racking up 21 themselves to send the game into overtime with the score all square at 48 apiece.

Going into the overtime period, Davis knew his seniors were going to need to play a big role to help the Lions come away with a victory, and they responded to Davis’ wishes. “Senior leadership played a big part. Reggie Mann, Josef Ransom, Brandon McGiboney, and EJ Grant stepped up big in the final minutes,” Davis said. The seniors combined for 49 points on the night.

Kingwood outscored Tuscaloosa Academy 9-5, winning the game 57-53. Ransom was the leading scorer on the night, with 21 points and 15 rebounds. Mann contributed another 16 points as well to help lead the Lions.

Moregan Sharp of Pelham drives to the basket around Oak Mountain’s Jackson Lovelady as Oak Mountain fell on the road... read more