Spain Park in the midst of impressive season 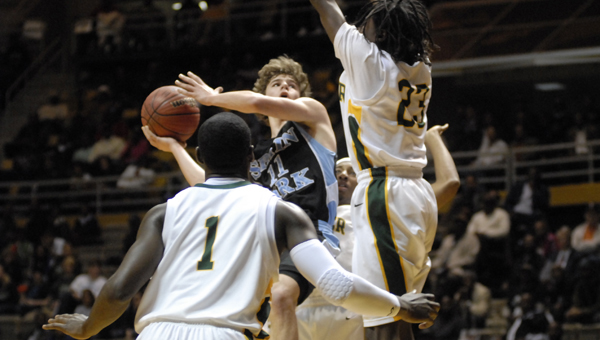 Spain Park, shown here in action last season, is one of the best teams in class 7A this season. (Reporter photo/Mickel Ponthieux)

High school basketball in the Birmingham and surrounding areas has always been competitive, with the area producing multiple state championship teams in recent years. This year, Shelby County’s own Spain Park is among the upper echelon of programs looking to compete for a state title.

Ranked fourth in 7A in the most recent Alabama Sports Writers’ Association rankings, the Jaguars currently stand at 18-3, with one of their losses coming via last year’s 6A State Champion Mountain Brook, and suffered without their 6-foot-nine-inch sophomore center Austin Wiley. Head Coach Neal Barker is in his fourth season at the helm for the Jaguars, and considers himself lucky to be in the position he is.

“I can’t picture a better program to be a part of,” Barker said in a Jan. 16 interview. “I’m very happy where I am. There’s no moving up from here in high school basketball.”

Barker has numerous reasons to be excited about his current crop of talent, with two of the best players in the area on his roster in Wiley and fellow sophomore Jamal Johnson, both of whom come from impressive basketball stock.

“Austin’s mom might be the best women’s basketball player ever to play in Alabama,” Barker explained. Wiley’s mother, Vickie Orr Wiley, was a member of the 1992 Olympic basketball team that captured the bronze medal in Barcelona, according to Barker. She played for Auburn during her college years, as did Wiley’s father Aubrey Wiley.

Johnson, the point guard for the Jaguars, has also grown up in a basketball-centered house. His father, Buck Johnson, attended Alabama and was a first-round draft pick in the 1986 NBA draft by the Houston Rockets, according to Nba.com.

While Johnson and Wiley are the focal points of the team, and will continue to be for the remainder of their high school careers, Barker believes this particular team has a chance to be uniquely special.

Looking toward the end of the regular season and into the postseason tournament, Barker went on to explain the exciting yet nerve-wracking nature of the state tournament. The single-elimination format lends itself to upsets and upstart teams getting hot at the right time to win games against superior teams. Barker continued, “Nobody has higher expectations than me. We have the size and the skill level to compete for a state championship this year. Hopefully we stay healthy and are playing our best ball at the right time.”

Kingwood Christian gets big win against No. 2 Tuscaloosa…