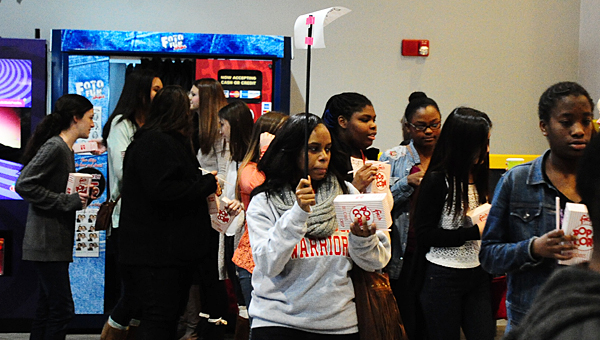 ALABASTER – The AmStar movie theater was a little busier on Jan. 16 than it normally is on Friday mornings as more than 900 Thompson Middle School students made their way into the building.

After arriving at AmStar with the help of a police escort, the TMS students grabbed a drink and a box of popcorn before making their way to the theaters to view a movie with a message.

“We wanted to actually do this at the theater so they could get the whole experience and be able to pay more attention to the message,” said TMS Assistant Principal Desaree Jackson. “AmStar even opened up an extra theater so all the kids could have good seats.”

During their trip, the kids viewed the movie “Bully,” which is a documentary following five middle school students who were the victims of bullying. After watching the movie, the students then completed anti-bullying activities at the school.

Jackson said she decided to help organize the trip as part of the Alabaster City School System’s anti-bullying day after viewing the movie.

“After viewing the video and seeing the different scenarios, I realized this really is going on daily at our school,” Jackson said. “We need to handle this.”

Because the movie was filmed in a middle school, Jackson and TMS Principal Neely Woodley said the kids were able to easily identify with the scenarios presented in the film.

Woodley said she hoped the kids learned a few lessons above all others during the event.

“We will ask them to make a commitment to not bully, and also to report it when they see it happening,” Woodley said. “That’s what spoke to me the most when I watched the movie. A lot of kids saw bullying happening and didn’t report it. We want to make sure that doesn’t happen.”

Alabaster honors Teachers of the Year

Alabaster Board of Education members honor the city’s Teachers of the Year during a Jan. 12 meeting at Alabaster City... read more