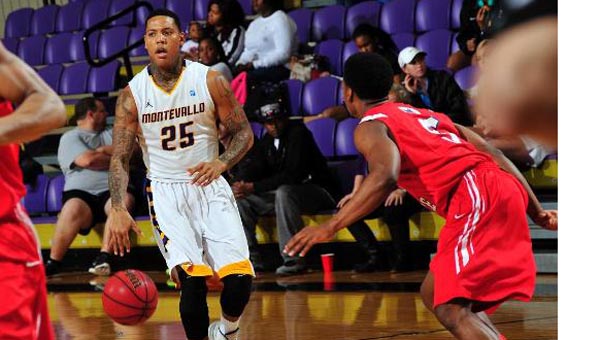 Troran Brown of Montevallo helped move the Falcons to 7-1 in conference play on Jan. 17. (Contributed)

MONTEVALLO, Ala. – Early in the first half of Saturday’s men’s basketball game between Lander University and the University of Montevallo, the Bearcats held a 10-point lead over the Falcons. Montevallo, however, mounted a furious comeback predicated on stellar defense and sharp shooting and closed the game on a 49-27 run to win by the final score of 61-49.

Down 22-12 early on, the Falcons relied on their guards to convert three-pointers and put them back in the game. UM stormed back to tie the game at 26 after made threes from Bryant Orange, Shykeem Jackson, and Troran Brown, who hit two. Jackson also made a layup to complete the 14-4 run.

Lander took a four-point lead into the break, as Tobiasz Hose hit a three-pointer for the Bearcats with just seconds showing on the clock.

Unfortunately for Lander, the second half would belong to Montevallo, as the Falcons would open up the second with an 18-2 run.

Following that run by the home team, Lander was never able to cut the lead to within single digits, and the Bearcats dropped their third straight game after winning their first 13 to open up the season.

The 61-49 win for the Falcons moved their record in conference play to 7-1 and their overall record to 11-7. They are tied with Columbus State for the lead in the Peach Belt’s West Division.

Fresh off his first double-double of the season, Jackson just missed getting another one, scoring nine points and securing nine boards.

It was a complete team win for Montevallo, as they outrebounded Lander, had the edge in points in the paint, and had twice as many assists as the Bearcats.

Montevallo is back in action this Monday, January 19. They will host the USC Aiken Pacers in a rematch of last year’s Peach Belt Conference Championship Game, as well as the “Sweet Sixteen” matchup in the NCAA Tournament.

Montevallo men get back on track with win at…