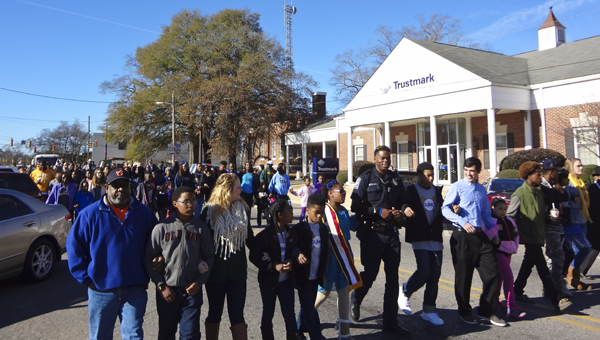 MONTEVALLO – More than 100 people gathered in Montevallo on Jan. 19 to honor the life and vision of Dr. Martin Luther King, Jr. in the city’s 11th annual unity march and program bearing his name.

Participants marched through downtown – some singing songs, others holding banners – and ended at Montevallo High School for a program in the auditorium celebrating the efforts of King and others to establish racial equality in the United States.

Guest speaker, the Rev. Michael Jones of New Mount Moriah Church in Calera, posed questions to attendees about their level of involvement in social change.

“The interesting interrogative before us this morning is: Which group do you find yourself in?” Jones said. “Are you one who watches things happen? Are you one that wakes up and wonders what happened? I believe in this place today we have people who are going to make things happen.”

Jones asked attendees if they were “game-changers,” which he defined as people who strategically make a difference to change the world.

Grand marshal for this year’s event was Mikeria Howard, a young actress in “Selma,” a movie released this month that depicts the three-month period in 1965 when King stood at the forefront of a campaign for voting rights.

The Rev. Kenneth Dukes offered greetings from the Shelby County NAACP chapter and recognized civil rights “foot soldiers,” or those who contribute in any way to civil rights-related efforts.

“We’re in a generation now it’s time for you young people to speak up,” Dukes said.

Montevallo Mayor Hollie Cost said she hopes to see the event grow in the future.

“The biggest part of community is unity,” Cost said. “I also look forward to the day where our civil rights wounds and scars are not as fresh. We have rights; we shouldn’t have fights.”

Quincy Whitehead, who helped form Montevallo’s annual MLK Jr. Day event, said this year’s event was the “biggest one yet.”

“What has happened so far this morning has exceeded my expectations,” she said.

The New Mount Moriah Youth Choir sang, and Adrian Pearson performed a praise dance to “We Are All One.”