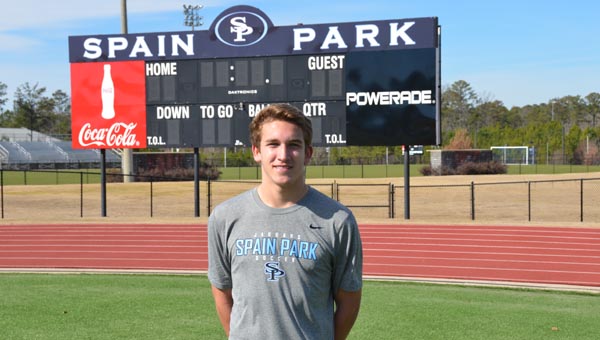 Erik Henze, a senior defensive back for Spain Park’s soccer program, has been offered a spot on UAB’s roster as a preferred walk-on after he graduates. (Reporter Photo / Baker Ellis)

Spring is coming. The weather is getting more pleasant and outdoor sports are almost back in season. People are beginning to exit the hibernation that the winter months bring with them. With spring in Alabama comes baseball, track and field, and soccer.

For Spain Park’s soccer team, they are hoping for a breakthrough season, which will come in part on the back and foot of senior Erik Henze, who has verbally committed to play soccer next year for UAB. Henze, who has been offered a roster spot as a preferred walk-on, has not yet signed a letter of intent, according to Spain Park head coach Matt Hall.

“He’s been offered a spot on their roster,” Hall said. “He hasn’t signed yet, but he has verbally committed to play for them next year.”

Henze, a soft-spoken, polite kid who plays in the middle of Spain Park’s defensive line, cited the UAB coaching staff as the main factor in his decision.

The UAB Blazers are a Division I program that compete in the Conference USA and are a competitive program nationally, according to Hall during a Jan. 16 phone interview. “They’re a D1 school that has made numerous appearances in the NCAA tournament over the years,” said Hall. “They’re traditionally a very strong program.”

Henze will be relied on this year by Spain Park to play an integral role in their defense and counterattack, but understands that his days as a central defender could be numbered.

“I’m going to play wherever they (UAB) need me to,” Henze said. “The coaches said they will see where I fit best whenever I get there.”

This was an echo of Hall’s own musings regarding his star defender; “He’s a versatile player. Big, strong, fast kid. He may get moved around at the next level, but he’ll be a strong asset to UAB.”

However, before Henze turns his focus toward college, he wants to remain focused on the season at hand. “I think we’ve got a good chance to make the state tournament, who knows, maybe go farther,” he said.

Spain Park has 12 seniors on its roster for this season and will look to make some noise in 7A play this year before saying goodbye to Henze.

Montevallo holds off Lander to move to 7-1 in…