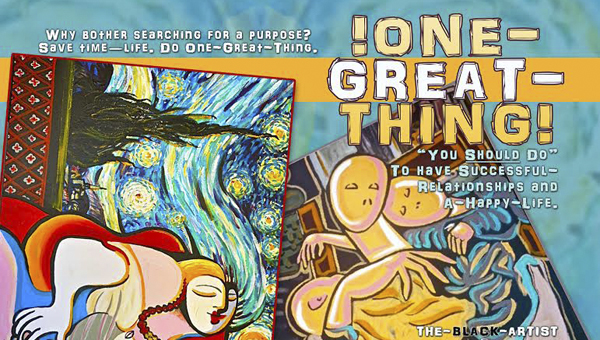 Chelsea artist John Solomon Sandridge approached the Chelsea City Council about a project to distribute his book, “!One-Great-Thing!” to schools and correctional facilities across the state. (Contributed)

CHELSEA – Artist and author John Solomon Sandridge with the Number 2 Pencil Foundation hopes his book “!One-Great-Thing!” and its message reach children and adults throughout Chelsea and beyond.

Sandridge addressed the Chelsea City Council earlier this month about the book and his efforts to give copies to Chelsea High School students and staff.

“This is the book we’re presenting to Chelsea High School,” Sandridge said as Number 2 Pencil Foundation board members passed out copies of “!One-Great-Thing!” to council members during a meeting Jan. 6. “We’re going to give the book to each student, 1,200 students in the school. We’re going to ask them to read the book and have a discussion.”

The book focuses on personal change and how doing “one great thing” can help people achieve their purpose.

“Last year, I came to see the importance of attitude,” Sandridge said. “Attitude will get us into trouble, or attitude will cause us to be successful.”

Along with distributing copies of the book and facilitating discussions about its themes, the project would include producing an hour-long documentary, Sandridge said.

“Our intent is to go into every school we possibly can in the state of Alabama, the U.S. and hopefully abroad,” Sandridge said. “We want to become citywide, statewide and national.”

The Number 2 Pencil Foundation is a non-profit organization established by Sandridge, “The Black Artist,” to promote the power of imagination to children, teenagers and young adults.

The foundation is also donating 1,200 books to the inmates and staff at Donaldson Correctional Facility in Bessemer.

“We would like for you to join in this project,” Sandridge said to the council. “What we’re wanting to do is to say, this book, the concept ‘Change your attitude, change your life, change the world one person at a time beginning with me’ … was birthed here in the city of Chelsea.”

Sandridge presented the council with a proclamation and resolution with the preceding information.

“We’re hoping that this can be something that you look over and consider,” Sandridge said. “If we could have your blessing with the proclamation and resolution, it would give us an opportunity to get our foot in the door, to say this came out of Chelsea.”

Niven said the council would discuss the proclamation and resolution, but no action was taken on the items Jan. 6.

In other business, the council held a public hearing for a re-zoning request approved by the Chelsea Planning Commission that was originally submitted by Jason Spinks with “To Preach the Gospel, Inc.” for property located next to Lakewood subdivision on Shelby County 32.

The parcel of land contains 45 acres, and Spinks asked to re-zone the land from agricultural-residential to residential, which City Engineer Frank Spencer confirmed would be appropriate for the area.

The council also approved a resolution to re-appoint Mel Cosgrove to the Chelsea Planning Commission.