BIRMINGHAM – A 19-year-old Alabaster man is facing up to 20 years in prison after he allegedly stole a military Humvee from a Birmingham Army Reserve unit and driving it on the wrong side of the road. 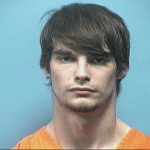 The Shelby County Sheriff’s Office arrested Jacob Russell Durant on Jan. 16 and charged him with one felony count of first-degree receiving stolen property.

Sheriff’s Office deputies initiated a traffic stop of the military vehicle on Shelby County 11 near Shelby County 36 after receiving reports of the vehicle traveling on the wrong side of the road without using headlights.

“Upon further investigation, deputies determined the Humvee was stolen from the Army Reserve station located on Greensprings Highway in Birmingham,” read a Sheriff’s Office press release. “The vehicle was released to the 5th Medical Brigade, Army Reserve Unit.”

As of Jan. 20, the Birmingham Police Department was still investigating the theft, and the Shelby County Sheriff’s Office was encouraging anyone with information about the incident to call the office directly at 669-4181, call the secret witness line at 669-9116 or through Shelbyso.com by clicking on the “Report Criminal Activity” link and choosing the “General Information” category.

First-degree receiving stolen property is a Class B felony. If convicted, Durant could face up to 20 years in prison.