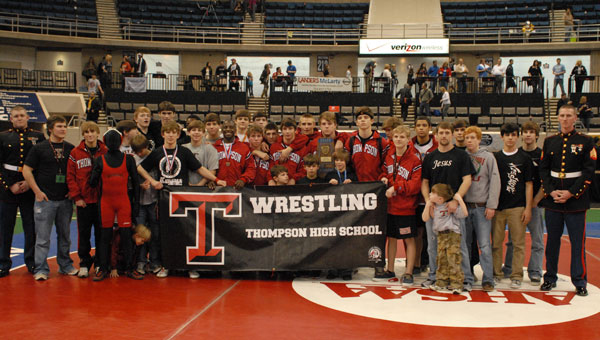 Thomspon High School had a good showing at the Shelby County Duals event held at Oak Mountain on Jan. 19. (File)

Thompson had two schools competing, one under the name Thompson, and another competing under the name THS. The team competing as Thompson went 5-0 on the day, with their closest match coming against Oak Mountain in a bout they won by a score of 44-21.

THS was defeated by Oak Mountain in a close match by a score of 43-32, and also by their brother team Thompson. They then went on to defeat Chelsea and Shelby County.

Oak Mountain lost to Thompson in their first match, but then defeated THS and Shelby County, as well as winning via default over Chelsea, giving them a 3-1 record on the day.

Pelham, Chelsea and Shelby County all left the day without a win, as Oak Mountain and both Thompson teams were the only teams to win a match on this day, and none of the three schools wrestled against the other.