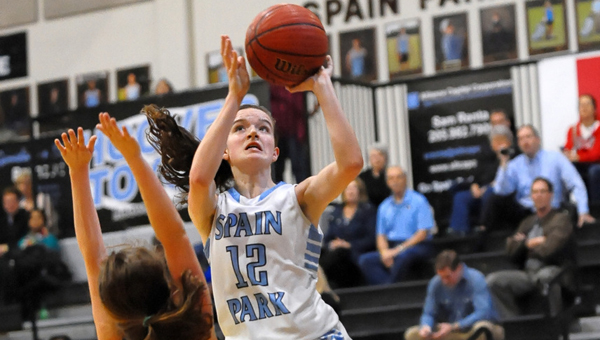 Claire Holt of Spain Park goes up for a basket during Spain Park’s 61-52 win over Mountain Brook. (Contributed / Ted Melton at actionsportspix.smugmug.com)

HOOVER- In a game that featured two top teams in Area 6 play of 7A, Mountain Brook wasn’t able to make enough plays late in the contest to keep up with the Lady Jaguars of Spain Park.

Mountain Brook stayed in a full court zone press for most of the game, dropping back into a shifting half court zone defense that Spain Park had trouble penetrating early. Spain Park was hot from outside however, hitting three first-quarter triples all from different players. Both teams shot the ball well on the way to an 11-11 tie after one.

Claire Holt of Spain Park went on a personal seven-point run at the beginning of the second quarter to open up a slight lead for the Lady Jags at 21-13. Mountain Brook then ripped off 10 straight points, capped off by a neat bucket from Lacey Jeffcoat. The two teams would go back and forth, and were tied going into the half at 27 apiece.

As the game moved into the third quarter, the game continued to seesaw back and forth, with both teams responding to the others’ baskets. Spain Park was able to pull away toward the end of the third-quarter behind seven points via Holt and Amanda Gasta to take a 39-34 lead going into the fourth.

Mountain Brook was never able to pull even again the rest of the way out. They were able to get within two points four separate times, but every time the Lady Spartans looked as if they were going to pull even or race ahead, Spain Park was able to respond. Victoria Baldwin scored 11 points in the fourth quarter, and the Lady Jaguars were able to connect on 6 of 9 free throws in the final period to stay ahead of Mountain Brook, finishing on top by a final score 61-53.

Baldwin led the way for Spain Park behind her strong fourth quarter outing, finishing with 14 points on the day.

Neely Francis of Mountain Brook led all scorers with 17.