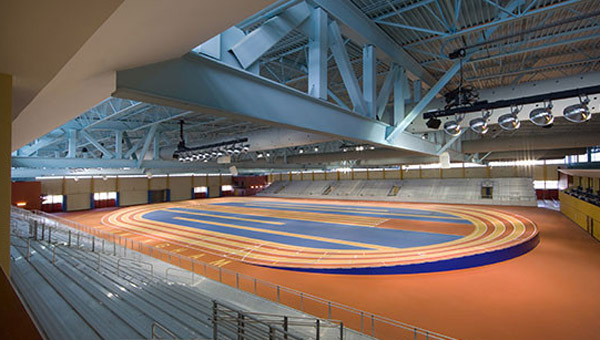 BIRMINGHAM- On Martin Luther King, Jr. Day the Birmingham Crossplex played home to an indoor track meet. The meet, which carries the same name as the man the third Monday in January is designed to honor, was an opportunity for track teams from all across the state to come and get a jumpstart on the outdoor spring season. Oak Mountain, Pelham, Spain Park and Thompson all competed and scored points in the meet.

The most impressive team performance from the area came from the Oak Mountain boys team, who finished sixth overall out of 37 teams competing. The Pelham boys finished 23rd on the day, while Spain Park and Thompson both had one individual break into the scoring column and finished 25th and 30th respectively.

The best individual performance on the day during the boys meet was from Cole Stidfole of Oak Mountain, who finished third in the 3200-meter run with a time of 9:57.08. Brandon Hollins of Pelham finished in the fourth place slot of the 400-meter dash with a scintillating early-season time of 50.34 seconds. Andrew Day and Sam Brown scored for Oak Mountain in the field events, Day placed sixth in the shot put while Brown finished tied for third in the high jump. Oak Mountain also finished comfortably in second place in the 4×400-meter relay.

Spain Park and Thompson both broke into the scoring column during the pole vault. Jeff Bannon of Spain Park finished third, giving the Jaguars 6 points on the day while Brett Blackmon of Thompson finished fifth.

The girls meet was highlighted by Nicole Payne of Oak Mountain who finished first overall in the 400-meter dash with a very impressive indoor time 57.27 seconds. Mary Grace Stozier of Pelham came in second overall in the 3200-meter run. Pelham also came in seventh in the 4×800 meter-relay in both the boys and girls meet.