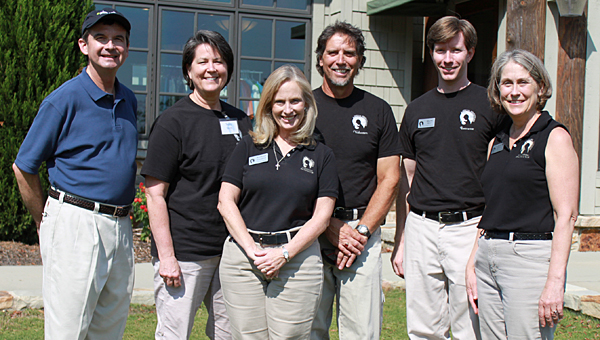 Dorrie Fuchs, far right, is remembered for living a life of dedicated, selfless service. Fuchs died on Jan. 10 at the age of 57. (File)

INDIAN SPRINGS VILLAGE – From the moment Special Equestrians Executive Director Kathleen Claybrook met Dorrie Fuchs in 2008, she knew she had come across someone special.

Fuchs, who began volunteering at the program offering therapeutic horseback riding activities to children and adults with special needs more than six years ago, worked tirelessly to become a certified instructor with the program by May 2009.

“The first time I met her, she talked about how excited she was to be involved in the therapeutic riding program,” Claybrook said. “She was a great instructor.”

Fuchs died on Jan. 10 at the age of 57 after a six-month battle against complications caused by bacterial meningitis. When she died, Fuchs was serving as the assistant director of Special Equestrians and was the president of the congregation of the Unitarian Universalist Church of Birmingham.

“Dorrie was a powerhouse of a woman who made a real difference in the lives of those she touched,” Rev. Lone Jensen Broussard, of the Unitarian Universalist Church of Birmingham, wrote in a letter to the congregation. “She was a committed, hard working and inspiring president who helped our congregation through some challenging times and loved our faith and our congregation.”

According to her obituary, Fuchs is survived by her husband of 18 years and director of Indian Springs School, Gareth M. Vaughan; her sisters, Katharine Seider (Michael) of Akron, Ohio, Barbara Brown of Grand Rapids, Mich., and Elizabeth Beck (Michael) of Sharon, Conn.; his sisters, Megan Vaughan (Wojciech Nowikowski) of London, U.K., and Glenys Vaughan (Ben Armstrong) of St. Albans, U.K.; and numerous nephews, nieces and cousins.

A memorial service will be held for Fuchs on Saturday, Feb. 7 at the Indian Springs Concert Hall, with a time to be announced at a later date.

“She loved all of the classes, but she had such an investment in that (horseback yoga class),” Claybrook said. “She wasn’t just a person who stood by and watched things happen. She always put 100 percent into everything.”