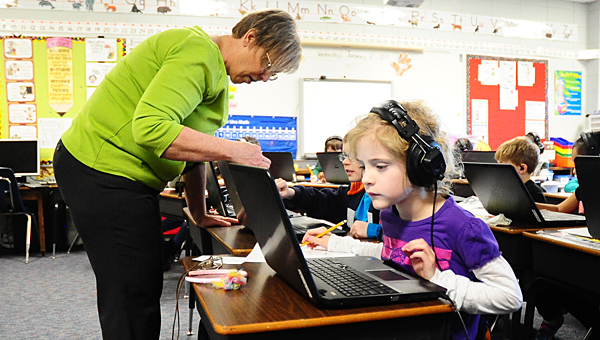 ALABASTER – Meadow View Elementary School technology coordinator Lynda Glass couldn’t help but notice how intently her students were focusing on their lesson on the morning of Jan. 21.

“It’s like we’re not even in here,” Glass said to MVES Principal Rachea Simms as they watched the kids conduct research using the Pebble Go computer program. “I’ve never seen them work so hard and independently.”

A group of about 18 students spent the morning using new Dell Latitude 3540 laptop computers recently purchased by the Alabaster Board of Education in November 2014.

The School Board voted unanimously during a Nov. 10, 2014, meeting to approve up to $300,000 to purchase 11 mobile carts containing 30 laptops apiece for the city’s schools.

Simms said MVES received its two laptop carts in December, and has spent the past few weeks finalizing plans to allow as many students to use the laptops as possible.

Alabaster School Board member Derek Henderson, who came to observe the class on Jan. 21, said seeing the kids diligently working with the laptops made the program’s impact more personal.

“You think a project is good when you vote on it at a board meeting, but it’s so nice to go into the classroom and see it in action,” Henderson said.

Before the School Board announced it was going to purchase the laptop carts for all schools, the MVES parent-teacher organization was planning to fund the project, Simms said.

“The two carts (the School Board) funded was going to be our big PTO project this year,” Simms said. “Now, they can use that money to fund another big project.”

Because the laptops are easy to transport anywhere in the school, it will solve several logistical problems MVES has faced in the past.

“Before, we would have two or three students gathered around one desktop,” Glass said. “It’s much more user-friendly when each student has their own laptop, and it keeps them right on task.”

It didn’t take students long to realize “Computers on wheels” could be shortened to “C.O.W.,” and the school’s pair of carts now sport dairy cow-themed decorations such as a cowbell, black and white paint and several toys MVES Assistant Principal Taylar Posey secured from Alabaster’s Chick-Fil-A restaurant.