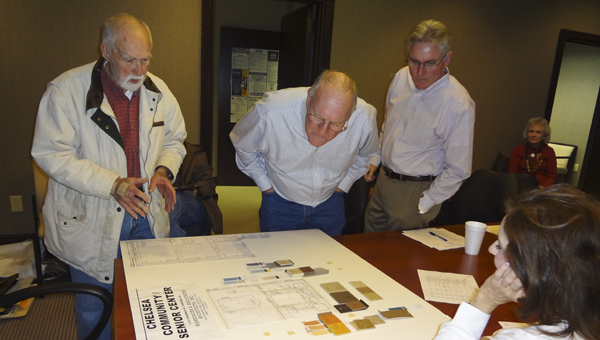 The architect for the project, Bob Wanninger, of Wanninger and Associates, shared the samples with the council during a pre-council meeting Jan. 20.

Work on the community center is on-schedule to be completed in May, Chelsea Mayor Earl Niven said during the meeting.

“We’ve been talking about it for three to four years,” Niven said in a December interview, adding that the center will serve young and senior adult residents.

The facility, which is about 30,000 square feet, features a kitchen, classrooms, community meeting rooms, an exercise room and a second-floor indoor walking track.

The senior adult wing will include a kitchen, dining area and two activity rooms.

Niven said Curves exercise equipment donated to the city will be used in the community center.

Crews installed roof trusses, each weighing about 11,000 pounds and measuring 92 feet long, with a 130-ton crane in December, and sub-roofing is currently being completed.

The community center roof is supposed to match the roof on Chelsea City Hall, according to Lawrence Brasher, of Argo Building Co., superintendent of the project.

Senior Nikola Polcerova of the University of Montevallo has been named the Falcon’s first ever preseason All PBC selection. (Contributed)... read more