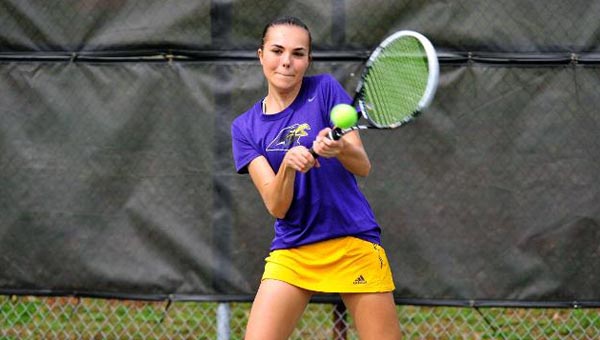 Senior Nikola Polcerova of the University of Montevallo has been named the Falcon’s first ever preseason All PBC selection. (Contributed)

AUGUSTA, Ga. – University of Montevallo senior Nikola Polcerova was named to the preseason All-Peach Belt Conference team Jan. 21, becoming the first ever member of the Falcons’ women’s tennis program to earn preseason All-Conference honors since Montevallo joined the conference in 2009.

Polcerova, a Bratislava, Slovakia native, was named second team All-Peach Belt Conference following her junior season, earning the Falcons’ first ever postseason honor as a member of the conference.

Polcerova is a two-time Peach Belt Conference All-Academic selection and has been named a Gold Scholar on the conference’s Presidential Honor Roll in each of the past three years.

Polcerova and her teammates will open the 2015 season Sunday, Feb. 1 with a home non-conference match against the University of West Alabama.

Montevallo downs USC Aiken on the backs of Brown, Johnson and company

Montevallo’s Troran Brown, scored a game-high 24 points against USC Aiken to move the Falcons to 8-1 in conference play.... read more