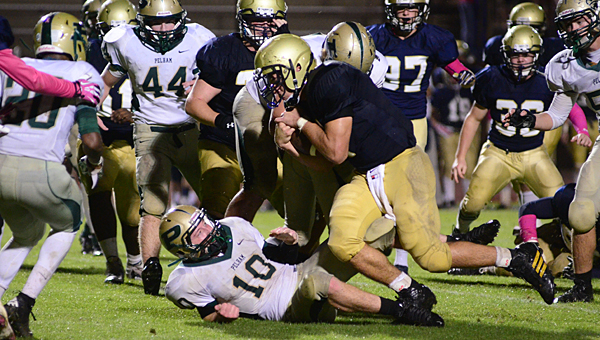 Former Briarwood Christian School quarterback Walker Lott carries the ball against Pelham during a 2014 game against Pelham. Lott will suit up for the Thompson Warriors for the 2015 season. (File)

ALABASTER – The two-year starting quarterback for the Briarwood Christian School Lions will suit up for the Thompson Warriors during his senior season after recently transferring to the school.

Eleventh-grader Walker Lott, who started under center for the Briarwood Lions during the 2013 and 2014 seasons, will compete for a starting role with the Warriors once spring training begins, THS coach Mark Freeman said.

“His family contacted us about two weeks ago. It was a surprise to us,” Freeman said. “I think we’ve got some opportunities (at THS) in his academic area, in addition to having the chance to play some football.”

Freeman said Lott’s playing role, like all members of the THS football team, will be decided during spring training.

“All we are doing now is weight training trying to get the kids used to our program,” Freeman said. “All of our kids are going to have the chance to start over going into spring training.”

During his sophomore season in 2013, Lott led the Lions to a 9-3 overall record and a trip to the second round of the Class 5A playoffs.

In 2014, the Lions moved up to Class 6A, and recorded a 4-7 overall record. Briarwood fell to Florence 38-16 in the first round of the playoffs.

Lott ended his junior season with 968 yards, and completed 81 of 172 passing attempts for eight touchdowns and 14 interceptions, according to his stats on Maxpreps.com.

Lott’s father, Trey, announced he was stepping down from his position on the Hoover City Council during a Jan. 20 meeting because he was moving to Alabaster.

“(Walker) is a great human being, and he comes from a great family,” Freeman said. “He’s a great kid.”