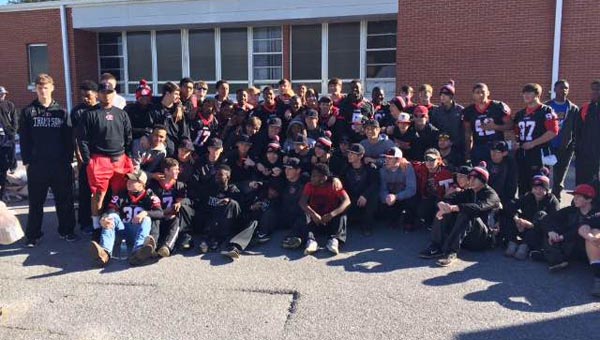 ALABASTER- Martin Luther King Day is a day for students to sleep in, ease into the day and enjoy the freedom one man gave his life to earn. However for roughly 100 student-athletes at Thompson High School, they took the day as an opportunity to give something back to their community.

Kid’s First Awareness Community Learning Center is based in Alabaster and focuses on providing community outreach programs for at-risk children and their families, amongst other service areas, according to the center’s website, Kidsfirst123.com. They approached Thompson with a need, and the coaches were eager to lend a hand.

“We were approached by Kid’s First because they had about 4,000 pounds of food that needed to be packaged,” boys head basketball coach Patrick Davis said. “We had about 80-100 kids come out on Monday morning to help get the food prepared to be delivered to the community.”

The students who came out to help were members of the basketball, baseball, and football teams. The camaraderie between the teams and their willingness to serve their community is an important element to the sporting community at Thompson.

“We’re always looking for our kids to use their platform as athletes in the community to help,” Davis said.

“I’m really proud of what they (students) did and the way they worked,” head football coach Mark Freeman relayed. “It’s a great thing to have a number of kids help out the way they did.”

The food that the students packaged was then delivered to the families in the Alabaster community later that day. The students were not involved with the distribution of the food, however the willingness to lend a hand on a day off from school speaks to the character of all involved.

Davis went on to relay that the students had a good time participating and “everyone just enjoyed being able to help out.”