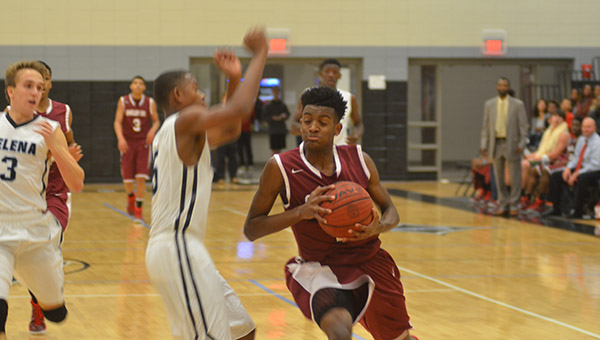 The Spain Park Wildcats have had an impressive season to date, rising to number 6 in class 5A. (Reporter Photo/Graham Brooks)

COLUMBIANA- Torry Brown is in his fourth season as the head basketball coach for the Shelby County Wildcats. His team currently sits at 19-6 on the year, and is ranked sixth in class 5A heading into the twilight of the regular season. He has eight players on the team, plays them all, and every starter averages double-digit points. Brown lives in Anniston with his wife and five children, and makes the hour and 15 minute commute back and forth every day.

Brown spent four years as an assistant at Hoover under Charlers Burkett before making the transition, and could not be more happy with his current position.

“I just really enjoy working with kids,” said Brown. “I love it.”

Brown has built a consistently competitive program during his tenure at Shelby County. Two years ago his Wildcats climbed to a 28-6 record before falling in the regional finals to Paul Bryant.

“Our team two years ago could physically dominate people,” said Brown. “We had some really big kids. This team is a little different, a little smaller. We’re more athletic though, and we shoot the ball a little better.”

The achievement that has eluded Brown and Shelby County during his time is a trip to the Sweet Sixteen. He believes this team has a chance to punch that ticket this year.

There are a number of potential hazards facing the Wildcats as they try to reach uncharted waters under Brown. Chief among these is the level of competition in their region.

“It’s an exciting time for basketball in Shelby County as a whole. The county from top to bottom has great teams and great coaches, and I’m just happy they’ve let me stay around,” Brown said with a chuckle.

Shelby County stands at 4-1 in area 8 play, and will play its last area game tonight, Jan. 23 at Clay-Chalkville for a share of the area lead. Talladega currently is in first place at 5-1 in area play.