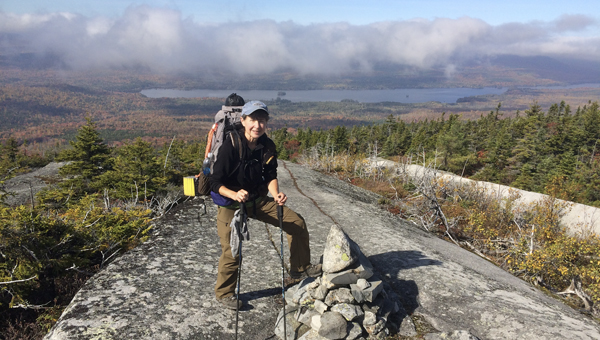 CHELSEA – Cathey Leach has enjoyed backpacking throughout her life, but last year, she decided to turn her hobby into a mission to prove she could conquer one of the longest trails in the world.

With a 35-pound pack strapped to her back, Leach, 61, hiked the entire Appalachian Trail on foot over a six-month period.

She set out from Springer Mountain, Ga., in April, traversed 14 states and arrived at the trail’s end at Katahdin, Maine, in October.

Leach described her decision to attempt the Appalachian Trail, also known as the “A.T.,” as an “ah-ha moment.”

“I thought, ‘I’m going to do this. I’ve got legs that can walk and a mind that can get me on and off the trail,'” she said.

Prior to completing the A.T., Leach’s longest hike was about 35 miles.

Each year, Leach and three of her friends go on backpacking trips together, but she was the only one in the group to sign up for the A.T.

Leach’s son, Cully Dorer, hiked with her for 17 days at the start of her A.T. journey and joined her for the last several days as she approached Katahdin.

Her husband, Ted, met her four times along the trail and spent two weeks with her in Pennsylvania, which accounted for some of the most difficult terrain she had to navigate.

“Mentally, I knew that would be my hardest stretch because it’s just rocks and snakes,” Leach said. “I had to cope with my fear of snakes. I saw four rattlesnakes, very close.”

In her pack, she carried a sleeping bag, a tent, water, non-perishable foods, one change of clothes, first-aid items, a small journal, water shoes and a sheet of paper with inspirational writings she compiled beforehand.

“I would probably hike four to five days before I needed to re-supply,” Leach said.

Leach said she felt secure on the trail and made numerous friends along the way.

“This awesome trail community starts to form,” she said. “They’re kind of like your neighbors in time. I never felt scared on the trail of people.”

Leach said the A.T. was her final long-distance hike.

“I enjoyed doing something most people don’t get to do,” she said.

The Spain Park Wildcats have had an impressive season to date, rising to number 6 in class 5A. (Reporter Photo/Graham... read more