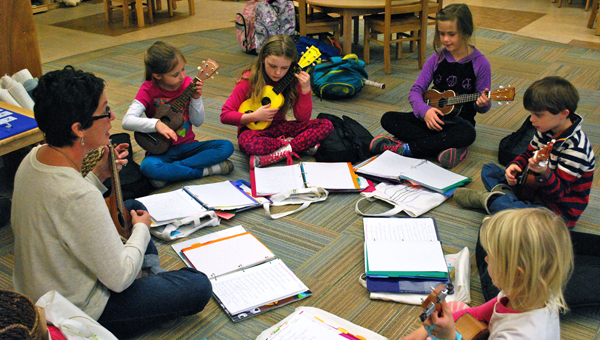 Students in Hilltop Montessori School’s Ukulele Jam Club work on friendship songs, such as “Mail Myself to You” by Woody Guthrie. (Reporter Photo / Molly Davidson)

MT LAUREL—Notes from Woody Guthrie’s “Mail Myself to You” drifted through the halls of Hilltop Montessori School on Jan. 22. The music was coming from a group of five students sitting in a circle in a classroom and strumming ukuleles.

The students are part of Hilltop Montessori School’s Ukulele Jam Club, led by teacher Toni Vickers. Each Monday and Thursday, Vickers teaches students the basics of the ukulele and leads students through popular songs adapted for the instrument.

“It’s such a friendly instrument,” Vickers said of the ukulele. “That’s why it’s so great for children.”

Vickers teaches the 4 through 9-year-old students how to play the ukulele through a color-coded system. Each chord has a corresponding color, which the students note on their instrument and sheet music.

When students’ fingers get “tangled up,” they all talk through what is happening and how to avoid the problem in the future. Students also work together to perfect shifting chords in songs.

“We talk about how we’re going to get from here to there, and I let them tell me,” Vickers said. “They have each other as little teachers, we learn better together.”

The young ukulele players have advanced quickly, from playing basic C-Chord songs to more complicated songs. The group serenaded their classmates with holiday carols before winter vacation and also performed in front of the whole community during one of the school’s traditional peace ceremonies.

“They get nothing but positive feedback, and that boosts their confidence,” Vickers said.

“They’re really good,” Hilltop Montessori Head of School Michele Wilensky said of the musicians. “It’s a wonderful way for our kids to get involved in music at an early age… early exposure to music is really wonderful.”