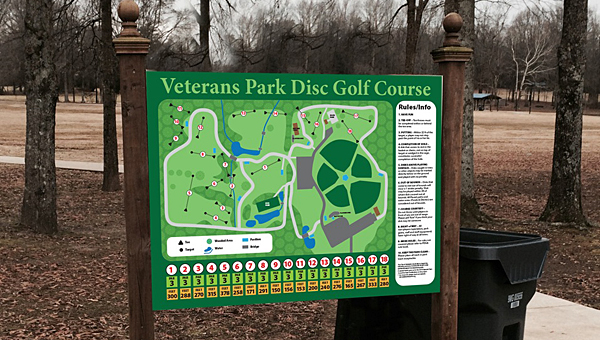 Alabaster will hold a grand opening ceremony for its new disc golf course at Veterans Park on Jan. 31. (Contributed)

ALABASTER – Locals now have a new place to enjoy an emerging sport in Alabaster, and the city is preparing to hold a grand opening ceremony for the new course on Saturday, Jan. 31.

The city will hold a grand opening and ribbon-cutting ceremony on a new 18-hole disc golf course at Veterans Park off Alabama 119 at 11 a.m. on Saturday, Jan. 31.

Over the past several months, the Alabaster Teen Council has worked with the Alabaster Sports and Entertainment Foundation to bring the project to fruition, Alabaster Mayor Marty Handlon said during an early-January interview.

After accepting the Teen Council’s proposal, ASEF donated $5,000 to the $11,000 project, and the city government funded the remaining expense of the professionally designed course.

The Alabaster Parks and Recreation Department is doing much of the work on the 18-hole disc golf course in-house, and has already begun constructing it at Veterans Park, Handlon said. The course likely will be completed by the end of January, weather-permitting.

Once completed, Veterans Park will join a handful of other disc golf courses in the Birmingham area, including one in Inverness and another at Birmingham’s George Ward Park.

Through the sport, players use Frisbee-like discs of different weights in an attempt to reach chain-lined metal baskets – or “holes.” Similar to golf, disc golf players attempt to reach the hole in as few throws as possible.

Horticulturalist Jason Powell talks about ways to prepare a garden and yard for spring during the wintertime. (Reporter Photo /... read more