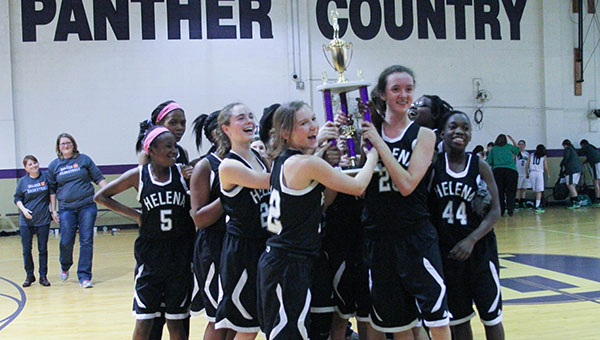 HUEYTOWN–The Helena Middle School girls basketball team won the Southern Conference Tournament Championship after coming in to the tournament as a number three seed and 13-3 record.

After defeating Briarwood and Chelsea respectively, Helena faced the number one seed, John Carroll.  Helena had previously lost twice to John Carroll during the season by a total of 6 points before meeting a third time in the championship game.

Hueytown Middle School played host to the championship game on Friday, Jan. 16. It was a tight first half as Helena led 18-17 at halftime.

The second half was sparked by season scoring leader, Niya Oden, who led with 10 third quarter points and a game high 22 points. Emma Johnson had a season-high 10 points and Brooklyn Oden scored 7 points.

The Husky defense held John Carroll to just 10 points in the second half and defeated the Cavaliers 42-27 to win the championship.  The defense proved solid through the tough play of eight grader Victoria Brown and seventh grader Allison Tanner. This was Helena’s first conference championship win.

The Huskies were led this season by the scoring of Niya Oden (292 points) and her seventh grade sister, Brooklyn (176 points).  Coaches Nancy Pierce and Christine Hoffman knew the seventh and eighth graders provided the leadership for the successful season, giving the team a strong chance to repeat next season.