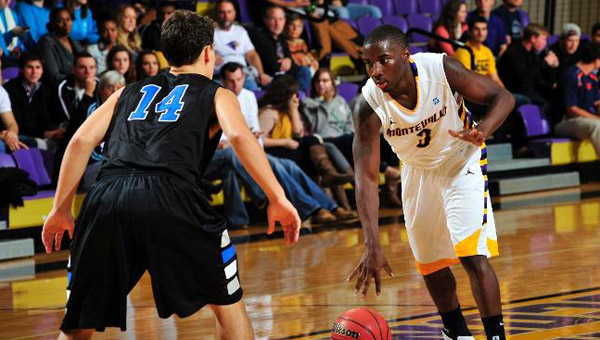 Shykeem Jackson of Montevallo scored a team-high 21 points in the Falcons 77-67 win over Georgia College. (Contributed)

MILLEDGEVILLE, Ga. – In their second meeting of the season with the Georgia College Bobcats, the University of Montevallo men’s basketball team won their fourth straight game, sweeping the season series with a 77-67 win.

In the first half, the key for the Falcons in obtaining the lead was their performance at the free throw line. They went 8-for-11 and were led by Troran Brown who went 4-for-5 at the line.

Overall, the senior from Phoenix, Arizona led UM to a halftime lead of 34-28 with 19 points.

The Falcons also had seven steals in the first half, leading to 12 points., which doubled the Bobcats points off turnovers.

Montevallo expanded their lead and secured the win in the second half, continuing to turn the Bobcats over and getting a big half from the Peach Belt’s leader in minutes played, Shykeem Jackson.

Jackson scored 16 points in the second half and ended up with a team-high 21 points. He took a season-high 15 three-pointers, and tied a season-high by making five shots from beyond the arc.

Montevallo had a 15-3 run towards the start of the second half that firmly cemented their place on top. It took the lead from 41-36 all the way up to 56-39.

The run culminated in a made three-pointer from senior Ryan May.

In the paint for the Falcons, senior Larry Slaughter recorded his seventh double-double of the year with a 19-point, 13-rebound performance. He’s currently second in the Peach Belt Conference in total rebounds and rebounds per game.

Montevallo (13-7, 9-1) returns home this Wednesday, January 28, for their first of two games on the year with the University of North Georgia.

It will be the first game of a three-game home stand for the Falcons.