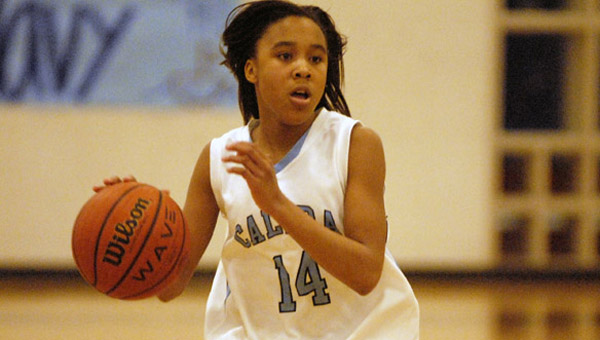 The Calera Lady Eagles fell to Central Tuscaloosa on Jan. 23 by a score of 74-55. (Contributed)

The Calera Lady Eagles stayed with the Central Tuscaloosa Falcons for most of three quarters, giving the fourth-ranked team in class 5A all they could handle before Shawntayla Harris and the Falcons pulled away in a 74-55 win.

In the first half, Calera used a strong three-point shooting effort to stay with a bigger Central team. Tia McCarter scored eight of her 12 points in the first half, helping the Eagles pull even at 30 at the break.

But in the second half, the Falcons used a stifling defense and strong inside play to pull away, going on an 18-0 run. Harris had 19 points in the first half, leading to a 28-point night. Harris also added 11 rebounds with four assists for the Falcons.

“They played hard, every bit of the game,” Calera coach Jason Knowles said. “They’re (Central Tuscaloosa) is a good team, they’re ranked for a reason. We’ve just got to keep working better and hopefully we’ll get another crack at them.”

Calera’s next match will be Jan. 27 at Shelby County High School.