The Pelham Police Department arrested Colin Greer Goins on two charges of identity theft and one count of second-degree theft of property on Jan. 20. 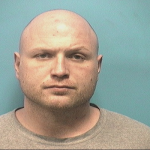 Goins was arrested in Pelham on warrants that had been issued in December and January 2013.

“We are doing our best to stop this issue,” said Palmer.

Palmer advised business owners in Pelham to be aware of who they do business with and to take the necessary precautions to protect themselves and their customers from identity theft crimes.

Theft of property in the second degree and identity theft are both Class C felonies and if convicted Goins could face up to 10 years in prison for each offense. Goins is being held in the Shelby County Jail on bonds totaling $40,000.