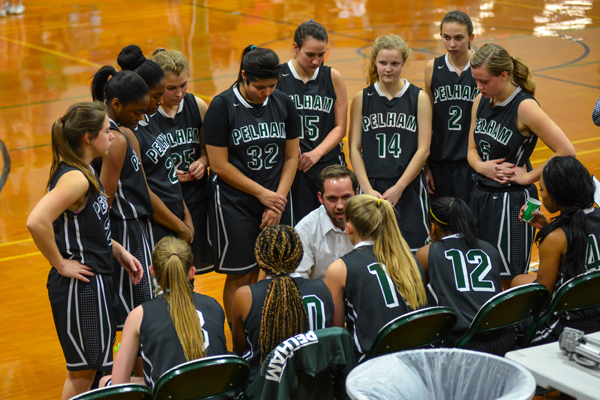 Pelham got off to a slow start only scoring five points in the first quarter. Alex Schrick and Kelli Jones scored two points apiece in the first. Kelsie Jacks scored one point at the free throw line, making the score at the end of the first quarter 12-5 with Homewood in the lead.

The second quarter moved at a much faster pace for the Panthers. Jacks put eight points on the board for Pelham, accompanied by Jones with two points and Erykah Hall scoring another two.

However, the Patriots kept used their momentum from the first quarter to the keep the lead in the second. The Patriots’ Tori Webb put four points on the board accompanied by Barber and Wayne, each with three points. Maya Cook and Kayla Mikula had two points each for the Patriots in the second, bringing the score at the half to 26-17 in favor of the Patriots.

Hall put five points on the board for the Panthers in the third and Jones scored two, making the score at the end of the third quarter 42-24.

In the fourth quarter, the Panthers seemed to find their rhythm and scored more than they had the entire game. Jacks led the way scoring four points followed by Schrick and Shelby Cost with three points each. Hall put two on the board for the panthers and Rebecca Fooshee scored one.

Despite the Panthers new found rhythm, Homewood stayed in control with Cook scoring six, Barber Scoring five and Hardy scoring two bringing the final score to 55-37 in favor of the Patriots.