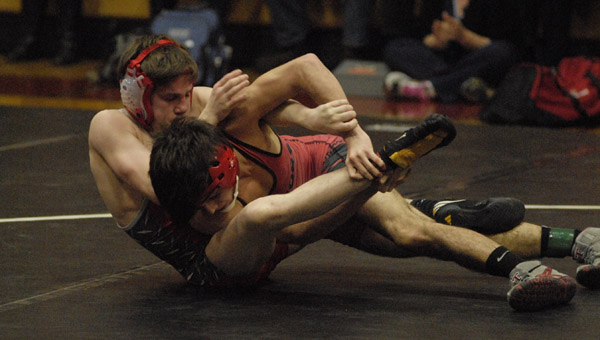 Thompson’s Cody Mealer, shown here in a previous match, helped lead Thompson to a victory in the Warrior Invitational on Jan. 24. (File)

ALABASTER- Thompson High School played host to the Warrior Invitational on Jan. 24 and came out of the day as the overall leader in points, beating out second place Mountain Brook by 68 points. The invitational, which saw local schools Pelham and Spain Park visit, was littered with Thompson victors.

Giovanni Adan of Pelham was the high-scorer for the Panthers on the day, finishing second in the 182-pound class, falling to Mobely in the finals.

Thompson won the event with a final total point count of 171.5.

Thompson’s Rashad Strother sets up to go around Matt Calhoun of Hoover in Hoover’s 60-42 win at Thompson on Jan.... read more