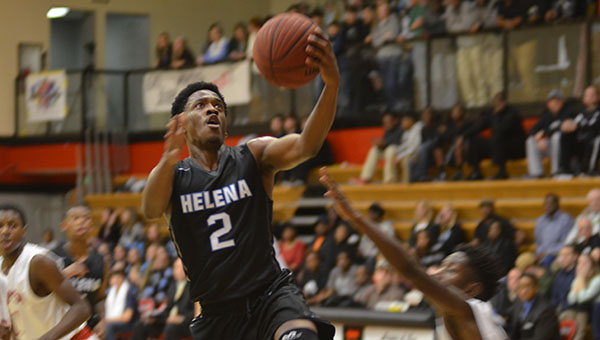 Paul Brown (2) of Helena goes up for a lay up. Brown had 13 points in the game. (Reporter Photo/Graham Brooks)

ALABASTER–The Helena Huskies came into Thompson High School on Monday, Jan. 26 as underdogs, but came away victorious as they spoiled Thompson’s senior night defeating the Warriors 70-58.

When the two teams met earlier in the year, it was Thompson who came away with the victory. A couple of weeks later, it is apparent that Helena head coach Chris Laatsch has the program headed in the right direction and Helena has continued to get better as the year has gone on.

“The games really mirrored each other with Thompson coming out and knocking down a lot of threes early just like they did last time, but tonight our kids didn’t fold,” Laatsch said when comparing the two games. “We got down 12 and battled back, kept believing, kept playing, kept grinding, kept battling and just showed a lot of maturity and toughness and we were able to make a few plays on our end and come out with a huge win for us.”

Helena made plays and knocked down some big shots when it mattered most and that was in the fourth quarter. The Huskies outscored Thompson 21-6 in the final quarter to get the win.

Freshman Justin Stuckey of Helena continued to impress on the offensive end of the floor. He opened the fourth quarter draining back-to-back three pointers to give Helena a 55-52 lead with 5:30 left in the game. Stuckey also came up with a key steal and lay-up to put Helena up 66-58 to secure the victory. Stuckey finished with 27 points on the night to lead all scorers.

Jon Brown and Paul Brown added 17 and 13 points for the Huskies as they improved their record to 15-12 overall and 4-2 in area play.

“I think out team is peaking at the right time and Oak Mountain will be our last game to prepare for our playoffs and hopefully we can make a run,” said Laatsch.

Helena takes on Oak Mountain on Friday, Jan. 30 on the road.

Jordan Lenoir (20) of Thompson drives by a Helena defender on her way to the basket. (Reporter Photo/Graham Brooks) By... read more