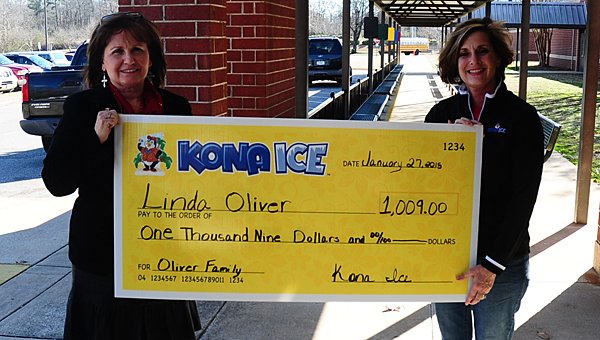 ALABASTER – Kona Ice owner Karla Butler’s hopes for a successful fundraiser for Alabaster’s former police chief took a bit of a dip when she saw the weather forecast for Jan. 15.

“It was the coldest Kona Ice fundraiser we’ve ever done,” said Butler, who owns the Alabaster-based business with her husband, Kevin. “But we were so surprised. Ninety percent of the classes – the whole classes – participated, and a lot of parents and grandparents came by.”

During the event, Kona Ice sold its shaved ice treats to Creek View Elementary School students, parents and visitors and donated half of the day’s profits to former Alabaster police chief Stanley Oliver and his wife, Linda, who works in the CVES front office.

At the end of the event, the Butlers had raised $1,009 to help the Oliver family.

“It was unbelievable,” Karla Butler said. “I was amazed at how many people we had. Some adults came by and just donated money.”

The Oliver family has been through a rough and uncertain several months, as Stanley Oliver was diagnosed last year with the rare disease pulmonary hypertension. The disease causes high blood pressure in the arteries of the lungs, and can eventually lead to scarring and non-functioning lungs.

Stanley Oliver was referred from UAB to the Cleveland Clinic in Ohio last summer, and began visiting the facility for tests in August. A few weeks ago, he learned the clinic had turned down his request for a double lung transplant because he has undergone open-heart surgery before.

Linda Oliver said her husband is now undergoing tests at UAB again in an effort to determine if his heart is strong enough to withstand the double lung transplant.

“We are very hopeful that the new surgeon will take him on at UAB,” Linda Oliver said during a Jan. 27 interview. “We are hopeful he will say yes.”

Throughout their ordeal, the family has had “awesome” support from CVES and the Alabaster community, she said.

“He has read thousands of Facebook comments from people supporting him – even from folks he arrested in the past,” Linda Oliver said. “The community has been great.”