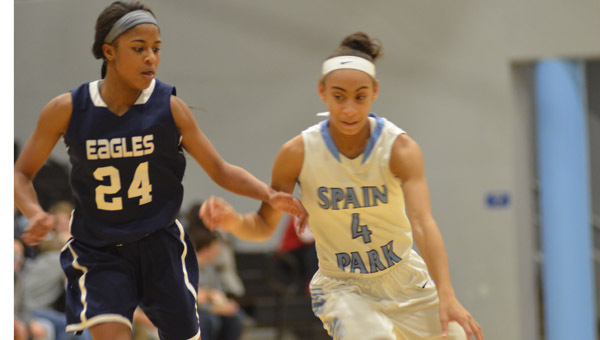 HOOVER- In a 7A matchup that pitted the girl’s from Spain Park against the Oak Mountain Lady Eagles, Spain Park was the dominant team throughout the game, winning without much resistance in a relatively low-scoring affair by a final score of 42-29.

The game started out closely enough, with both teams making early runs at the beginning of the first quarter. After Spain Park opened up a 5-0 lead, Oak Mountain responded with a 6-0 run of their own to take a 6-5 lead midway through the quarter. Spain Park would only connect on one more basket in the quarter, however that was one more bucket than Oak Mountain was able to score for the remainder of the first, and the Lady Jaguars took a 7-6 lead into the first break.

A multitude of turnovers and missed lay-ups defined the early stretches of the game, with neither team being able to connect on a number of close opportunities.

Victoria Baldwin connected on back-to-back threes for Spain Park in the middle of the second to stretch Spain Park’s lead to 14-6, and after two more Baldwin free throws, the Lady Eagles were only within 10 points one more time the rest of the night. Oak Mountain was able to end the quarter with four quick points to pull the game to 19-10 at the end of the first half.

The third quarter saw more of the same on both sides. Oak Mountain was able to score the first four points of the second half to make the score 19-14 before the Lady Jaguars ripped off an 11-2 run to take a commanding 31-16 lead. The run, headed by Baldwin and Skyla Knight, put the game away for the Lady Jaguars, and they took a 32-18 lead going into the final quarter of play.

Oak Mountain tried to make a run behind strong efforst from Madison Pierce, Jacoby Sims and Christian McGowan, but for every Lady Eagle’s basket, there was a Spain Park basket to match. The Lady Jaguars pulled away late to ice the game 42-29.

Bell named 7A Coach of the Year