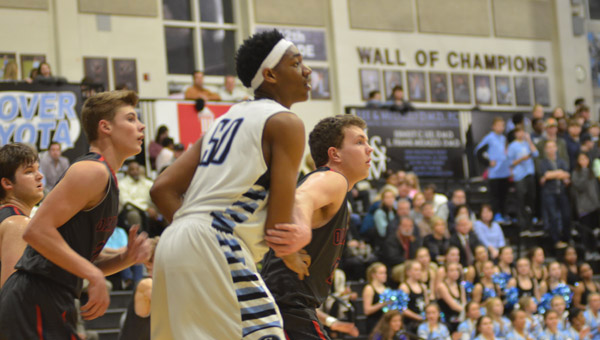 Austin Wiley of Spain Park tries to get position in the paint against two Oak Mountain defenders during Spain Park’s 69-41 win on Jan. 27. (Reporter Photo)

HOOVER- In a Jan. 27 matchup that pitted second-ranked Spain Park against Oak Mountain, the Jaguars took a commanding lead early and never looked back.

From the opening tip, Spain Park’s dynamic sophomore combination of Jamal Johnson and Austin Wiley asserted themselves into the fabric of the game, scoring 18 of the Jaguars’ 22 first quarter points. Johnson especially came out of the gate firing, connecting on two triples on top of an emphatic breakaway dunk that brought the home crowd to its feet. Wiley’s 6-foot-9-inch frame made life difficult inside all night for the Eagles, and Spain Park took a 22-9 lead into the second quarter.

Gabe Haynes and Payton Youngblood did what they could to keep Oak Mountain in the game in the second quarter. With Wiley and Johnson on the bench, the Eagles made a late second quarter push to make the halftime score a seemingly manageable 34-23 behind a 10-point combined effort from Youngblood and Haynes in the second.

Moving into the second half, Johnson asserted his will in the third quarter, connecting on three triples and a pair of free throws to give him 11 for the quarter. AJ Smiley and Wiley continued to make life difficult for Youngblood and the Eagles inside, and the Jaguars began to put some serious distance between themselves and Oak Mountain on the scoreboard. Spain Park led after three by a score of 58-31.

For most of the night, Oak Mountain had a problem with Spain Park’s length and athleticism on both sides of the floor. On defense, Wiley altered almost every shot in the lane and on offense, they would double or triple team him in the paint, leaving open shooters on the perimeter.

In the fourth quarter, the Eagles played the Jaguars to a relatively even quarter, but the damage was done, and Spain Park won 69-41.

Johnson led all scorers with 23, and Youngblood led the Eagles with 12 on the night.