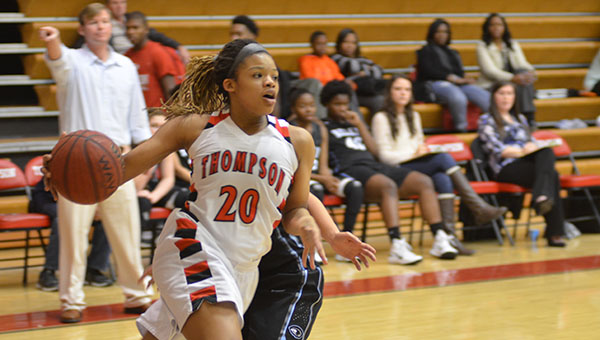 Jordan Lenoir (20) of Thompson drives by a Helena defender on her way to the basket. (Reporter Photo/Graham Brooks)

ALABASTER–The Thompson Lady Warriors are currently one of the top five teams in the state and it showed on Monday, Jan. 26 when the Lady Warriors rolled over the Helena Lady Huskies 63-17 at home.

Helena has made strides this year in just its first year being a program, but the size and defensive pressure of Thompson was too much to overcome for the Lady Huskies.

Thompson ended the first quarter leading 20-10 and only widened the margin the rest of the way and a big part of the success came from Thompson’s four seniors.

A minute into the second quarter, Thompson senior Janese Richardson was honored after surpassing 1,000 points in her career. Richardson finished the game with 8 points.

The four seniors honored Monday night were Richardson, Miyel Miller, Kelsea Bivins and Myessa Pelton who each played a big role in the win.

The leading scorers for Thompson were Miller and Bivins who each scored 14 points. Bivins also recorded 10 rebounds in the game.

“Those four girls have been with me since I got here day one last year and all had outstanding careers,” said Thompson head coach Josh Golden on the four seniors. “All four have been instrumental in the success we’ve had. They have a combined record of 44-13 over the last two years and they were our four leaders tonight. They are going to be missed next year.”

The Lady Huskies only managed to score 7 total points over the final three quarters as the Thompson defense strengthened as the game went on.

Thompson moved to 22-6 on the year and will try and continue their success in the upcoming area tournament.