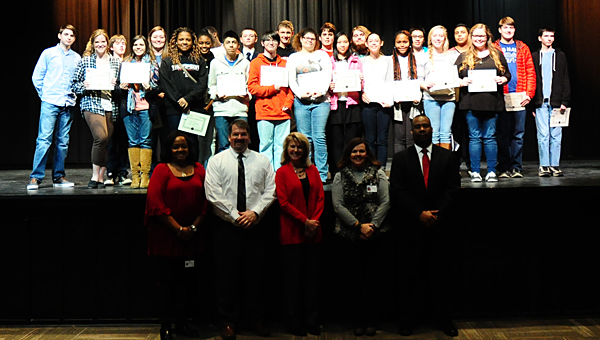 ALABASTER – A group of Thompson High School students finished the first semester of the 2014-2015 school year on a high note by not missing a single school day or recording any tardy arrivals.

The school’s administrators and Alabaster Mayor Marty Handlon teamed up with the THS parent-teacher organization on Jan. 28 to recognize the relatively small group of students who achieved the elusive perfect attendance honor for the first semester.

“I think that is a great feat, as far as student achievement,” THS Assistant Principal Taurus Felton, who is in charge of handling the school’s attendance matters, told the group of 44 students during the award ceremony in the school’s auditorium. “I would like to congratulate you for being here, and for being here on time.”

Handlon praised the students for earning the perfect attendance awards, and said they are already demonstrating skills they will be able to use after graduating high school.

“Being on time and being present every day is an important part of not only school, but also life. It says a lot about you, your integrity and your work ethic,” Handlon told the students. “I think this means you have a successful life ahead of you.”

The following students were recognized during the ceremony: