CHELSEA-Daryl Hyde, a fifth grade teacher at Chelsea Park Elementary School has published his first book, “Frog Level.” The novel has been downloadable as a Kindle e-book for a little over a year, but recently it became available as a paperback on Amazon. 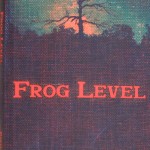 “Frog Level” is about Vickey, an 11-year old girl who has come to realize that her family is broken, and she’s decided she’ll do whatever it takes to fix it.  Both funny and heartbreaking, “Frog Level” is set in a small southern town in the late 1950’s, where moonshine was commonplace and dynamite caps weren’t so difficult for a little girl to get her hands on.

Hyde began writing the story years ago, after being challenged by a student to write a book.  Now that it’s finished, he reads the story to his fifth grade classes and uses it as the foundation for his writing and reading instruction all year long.

“I write because I have stories that I want to tell,” Hyde said.  “Vickey’s story is a tough one because her parents neglected and mistreated her.  Yet, throughout her childhood, she still managed to find joy.  And I want my students to know that there is always hope, no matter how bad things are.  Also, I want to model for my daughters and my students the entire process of taking an idea and working with it until it’s something I can be proud of.”

Hyde began the process of writing “Frog Level” by interviewing a co-worker and her family members.  These interviews proved an invaluable resource for story-telling. In his classroom now, Hyde has his students interview their family members for the purpose of finding a good story to write.

He said he’s hoping to put the stories his students write about their families into an ebook so that they can publish their own works on Amazon.

Frog Level is available through Amazon at Tinyurl.com/luccun6.