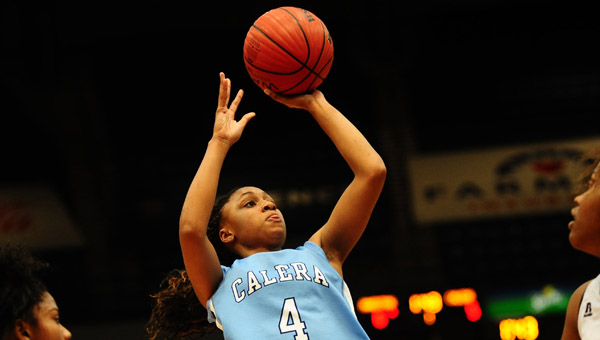 NEAL EMBRY / For the Reporter

COLUMBIANA- Despite an impressive rally late in the game, the Shelby County Lady Wildcats fell to the visiting Lady Eagles of Calera 48-37 in a Tuesday, Jan. 27 night game.

The Lady Eagles began the game on a 9-0 run, not allowing a basket for the first five and a half minutes of play.   Calera’s defense was able to force the Wildcats away from the basket, leading to turnovers and offensive opportunities for the Eagles.

Shelby County was able to stay in the game by forcing turnovers and holding Calera point guard Tyesha Haynes to just three points in the first half. Haynes finished with eight points and eight rebounds.

In the fourth quarter, the Wildcats came within three. Unfortunately for the home team, that was as close as they would get, as the Eagles finished the game on a 12-4 run to seal the victory.

“We didn’t play as well as we could have, but we were fortunate enough to come away with a victory,” Calera coach James Knowles said.