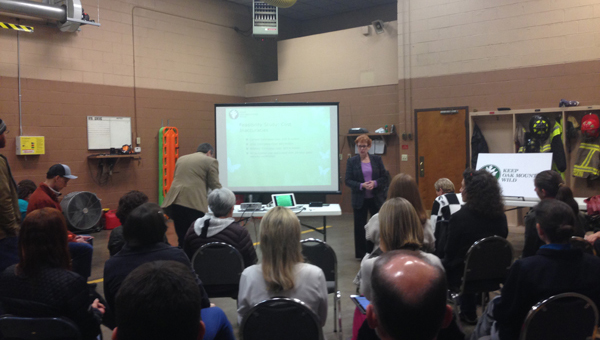 A meeting was held Tuesday night, Jan. 27 in Pelham by an organization that wants to stop the building of a hotel and conference in Oak Mountain State Park.

The group known as Keep Oak Mountain Wild met at Fire Station No. 2 off of Caldwell Mill Road.

The group has put together information that they believe should stop any future plans to commercialize Oak Mountain State Park.

Leaders of Keep Oak Mountain Wild have done research into the feasibility study done by the Shelby County Commission and said that the projected costs are inaccurate.

A presentation was given showing the inaccuracies the group had found in the feasibility study.

The group claimed there was a feasibility study conducted in 2002 that estimated the building costs to be $43 million, but the current estimated cost, 13 years later, is $35.5 million not including the cost of laying the foundation for the new development. According to the Keep Oak Mountain Wild officials, the actual estimated cost should be $59.9 million.

“Oak Mountain is a valuable resource and is enjoyed by not only people who are local but by people all over the state,” said Rita Jablonski-Jaudon. “We live in such an urban, concrete society and there are very few precious places to commune with nature.”

Other issues that the group cited in their presentation were pollution to the Buck Creek watershed, Oak Mountain Lake and the Cahaba River, and unprecedented pressure and ware on the earthen dams in the park.

Hub Harrington, a supporter of the Keep Oak Mountain Wild movement and Indian Springs resident, made the point that Alabama is the only state that does not regulate the inspections of dams.

“We are the only state that does not mandate periodic examinations of the dams by qualified engineers,” said Jablonski-Jaudon. “We have no idea if those earthen dams could withstand some type of storm and if you put a hotel and conference center on something that’s potentially stressed you are magnifying negative outcomes .”

Other issues addressed were potential 24 hour light and noise issues in the park.

“The introduction of light and noise into an area has been shown to change the migratory patterns of some animals,” said Jablonski-Jaudon, during her presentation.

Keep Oak Mountain Wild officials also pointed out that there has been no environmental impact study done with this project yet.

“Oak Mountain State Park represents a place where we can engage in leisure activities and also enjoy the peace and tranquility of the park,” said Jablonski-Jaudon

Those in attendance were encouraged to contact the Shelby County Commission and to sign the petition against the hotel and conference center.

Indian Springs Councilwoman Kathryn Harrington, who serves as a director and provides legal counsel the organization, was also in attendance.

“Keep Oak Mountain Wild is not a crisis organization,” said Harrington. “We are here to stay.”

To find more about the Keep Oak Mountain Wild organization, go to Keepoakmountainwild.com.