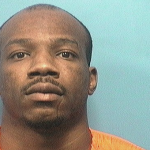 The Pelham Police Department arrested Brandon Cordaryl Gordon on Jan. 21, on a charge of first-degree robbery.

Gordon allegedly used a gun to attempt to rob the victim of his money, cell phone and keys on Oct. 9, 2014, according to court records. During the attempted robbery Gordon brought significant physical injury to the victim.

Gordon lists an address in the 2800block of Birmingham and has no prior violent crimes on his record.

First-degree robbery is a Class A felony and if convicted Gordon could face from 10 years to life in prison.