COLUMBIANA – A 58-year-old Hoover man who has been charged with allegedly selling synthetic drugs from his Alabaster convenience store is set to appear in the Shelby County Courthouse court on Feb. 4. 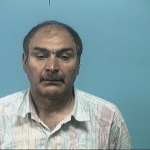 Ali Reza Samanifar, who lists an address on Pine Cliff Circle in Hoover, was arrested on May 7, 2014, by the Shelby County Drug Enforcement Task Force, along with the Drug Enforcement Agency, the Alabama Law Enforcement Agency and Alcohol Beverage Control Board and charged with three felony counts of unlawful distribution of a controlled substance.

Samanaifar was released from the Shelby County Jail in June 2014 after posting bonds totaling $45,000.

Unlawful distribution of a controlled substance is a Class B felony. If convicted of the crimes, Samanifar could face up to 20 years in prison per charge.