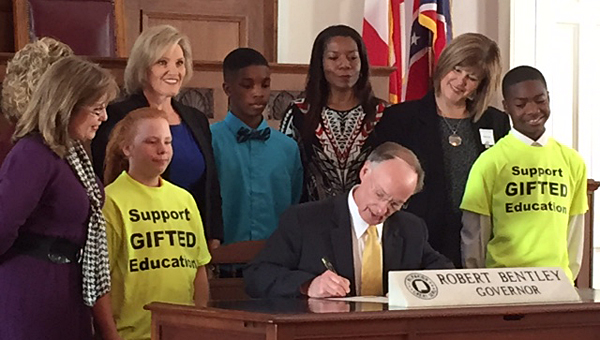 “Last year, the funding for gifted education was $1.05 million. That’s a drop in the bucket. It works out to about $3 total per gifted student,” Sparks said during a Jan. 28 interview. “Gifted education in Alabama is mandated, but not funded.”

While some of the state’s school systems are able to provide additional funding to their gifted education programs, many can not. As the vice president of the Alabama Association for Gifted Children, Sparks is working with the state’s government to provide a more level playing field for gifted students across Alabama.

Weaver witnessed TIS students writing computer code, and said she was “very impressed” with what she saw at the school.

“The teachers are making learning fun for these children,” Weaver wrote in an email, noting the children were using an iPad game to write computer code. 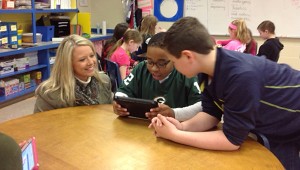 During the Montgomery trip, Bentley met with the group and listened to them explain the importance of supporting gifted services across the state.

The events served as the beginning of a larger statewide push to help increase state funding for Alabama’s gifted education programs, Sparks said. Alabama currently has more than 61,000 gifted students in its schools, but it is largely up to individual school systems to fund services for those students, she said.

“We are just trying to get the word out right now,” Sparks said. “It is estimated that we would need about $6 million to fund teaching units for the gifted students we have now. We have asked for $2.5 million for next year, which is really minimal funding.”

Sparks said the gifted association is focusing on highlighting the importance of increased funding, not criticizing state officials.

“We are trying to raise awareness in a positive, professional way,” she said.