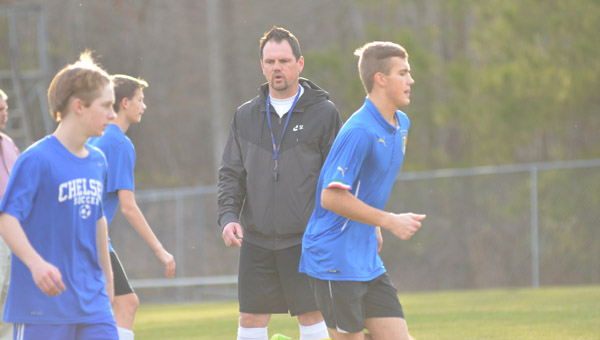 CHELSEA- Wilee Miller, head coach of the Chelsea boys’ soccer team, is gearing up for another season at the helm. Miller is going into his eighth season in charge of the Hornets, and has amassed a record of 92-58-11 in the seven years preceding this one. The Hornets have only missed the playoffs one time during his tenure, but they are looking for more this year.

One of the factors that will play into Chelsea’s season is the emergence of a 7A classification. The creation of 7A has moved a number of larger schools out of 6A, which is where the Hornets were last year and have remained for this year, which is fine by Miller.

“We were the smallest school in 6A last year in the state,” Miller said. “We had a tough schedule with those bigger schools.”

That is not to say the road has become significantly easier for Chelsea this year. The Hornets are in the same area as Briarwood and Pelham, both of which have storied soccer programs.

“Us, Briarwood and Pelham are three perennial playoff teams,” said Miller. “So there’s going to be an odd man out this year when it comes to making the playoffs.”

As the Hornets look to get to the top, they will look to Alabama All-Star midfielder Josh Bartlett to control the middle of the field in the four-defender, five-midfielder, one-striker alignment the Yellow Jackets use.

There is more youth on the roster than usual for the Hornets, after suffering the loss of a number of key seniors, but there will be ample opportunities for younger players to fill those roles.

Chelsea will kick off its season with a Feb. 9 contest at home against Hillcrest.

The University of Montevallo has rescheduled its inaugural softball game to Saturday, Jan. 31 at 1 p.m. (Contributed) By GRAHAM... read more