COLUMBIANA–A 27-year-old Columbiana man is being held in the Shelby County Jail on bond totaling $30,000 after he was charged with second-degree rape. 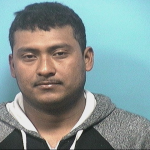 The Shelby County Sheriff’s Office arrested Alvero Orellano Gonzalez, who lists an address in the 1800 block of Highway 30 in Columbiana, on Jan. 27 and charged him with the felony charge.

According to his arrest warrants, Gonzalez was charged with second-degree rape from an incident on Jan. 26 or 27 in which he allegedly “engaged in sexual intercourse” with a female victim less than 16 years old.

Second-degree rape is a Class B felony, and is punishable by up to 20 years in prison upon conviction.

As of Jan. 29, Gonzalez did not have a future court date listed.