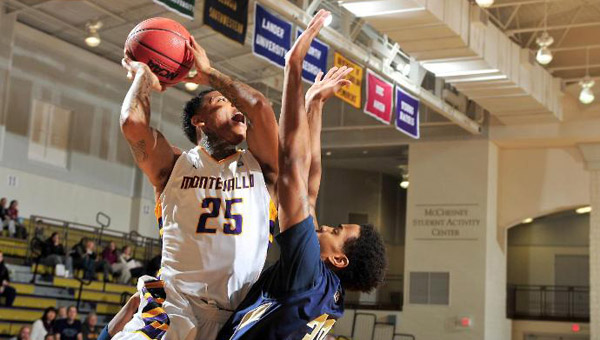 MONTEVALLO– The University of North Georgia Nighthawks scored the first basket in Wednesday night’s Jan. 28 matchup with the University of Montevallo Falcons, a meeting between two Peach Belt Conference West Division foes. That would, however, be the only time the visitors would hold the lead on the night, as the Montevallo men’s basketball team controlled the remainder of the game and went on to their fifth straight win, 76-62.

The Falcons gained the initial lead as a three-point play by senior Larry Slaughter opened up the scoring for UM. The Lancaster, California native fought through a foul to make a layup and then converted on the ensuing free throw.

The lead for Montevallo would quickly get to 11-4 behind six early points from junior Malik Fields.

Montevallo would continue to expand the lead, getting it to 17-7 after back-to-back three-pointers from seniors Ryan May and Shykeem Jackson.

May would be heard from again, giving the Falcons their largest lead of the half when he converted the rare four-point play.

North Georgia would chip away at the UM advantage before the half and went to the locker room trailing the Falcons, 42-33.

Montevallo would maintain their lead throughout the second half, never letting the Nighthawks within nine points.

When the final buzzer sounded, the Falcons were victorious in their first of two meetings on the year with the Nighthawks, 76-62.

Five Falcons finished the game in double figures, led by May and Jackson, who each finished with 16 points.

Jackson recorded his second double-double of the year, grabbing 10 boards to go along with his game-high point total. The guard was the game leader in rebounds.

The rebounding advantage was an integral part of the Falcons’ win. Montevallo outrebounded UNG 45-29, led by Jackson, as well as Slaughter and Ibrahim Johnson, who had eight and seven rebounds, respectively.

Senior Troran Brown also had a double-double, his fourth of the year. Brown had 15 points and 10 assists. The conference’s assist leader played all 40 minutes and shot 50% from the floor.

Fields finished with 10 points, shooting 66.7% from the floor and making both of his free throws.

Off the bench, junior Bryant Orange had 12 points on 6-of-11 shooting. The Chicago, Illinois native also had five boards and two assists.

The Falcons (14-7, 10-1) will look for the sixth straight win this Saturday, January 31, against Armstrong State.

Tip-off is set for 3:30 p.m. CST and will feature a ceremony at halftime honoring the 50th anniversary of basketball at the University of Montevallo.