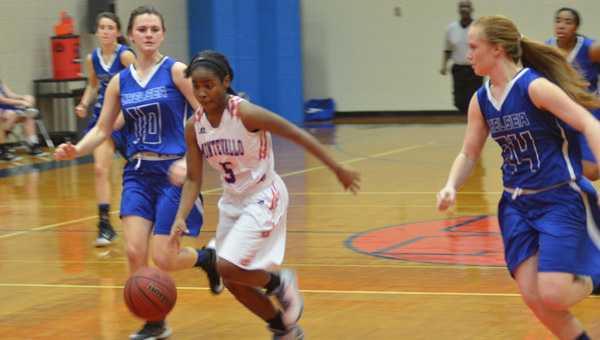 Alasha Reed of Montevallo breaks away for a lay-up against Chelsea. The Lady Bulldogs won handily, 55-23. (Reporter Photo / Baker Ellis)

MONTEVALLO- In a Thursday night contest that took place on Jan. 29, the Lady Hornets of Chelsea visited the Montevallo Lady Bulldogs on senior night and were turned away with a sound defeat.

Montevallo never trailed in the game, taking an immediate 2-0 lead off of the opening tip with a basket from Lauren Lilly. Lilly would score early and often in this contest, as she led all scorers with 21 points on the night over the course of only three quarters of play.

The Lady Bulldogs began to press Chelsea when the score was 12-6 in favor of Montevallo, and the wheels promptly fell off for the Lady Hornets, as they were only able to manage 17 more points the rest of the game. Lilly, Myshael Thompson and freshman Alasha Reed led the Lady Bulldogs to a 34-14 halftime lead.

Defensive pressure and offensive rebounding were key for Montevallo in the first half, and those same components of the game held true in the second as well, with Montevallo turning the Lady Hornets over seemingly at will throughout the contest. Chelsea only managed two third quarter points to the Lady Bulldogs’ 17 to bring the score to 51-16 after three, the game would soon end with a final score of 55-23.

Lilly led all scorers with 23, and Ally Miller contributed seven for Chelsea.

Montevallo will host the 4A area 7 tournament, where they will play Oak Grove at 7:00 on Feb. 4.

Chelsea will travel to Oxford High School to play Pell City on Feb. 5 at 6:00 in the 6A area 10 tournament.