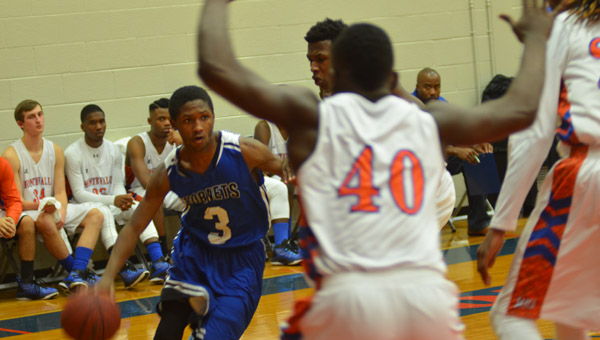 Chelsea’s Aaron Washington drives into the heart of the Montevallo defense on Jan. 29. Montevallo mounted a second-half comeback and walked away with a 64-53 win. (Reporter Photo / Baker Ellis)

MONTEVALLO- On senior night for the Montevallo Bulldogs, cross-county foe Chelsea came to play with an idea to spoil the night for the home crowd. And for the first 16 minutes of action, it looked bleak for the home team. However a furious second-half comeback left the visitors reeling and the Bulldogs came away victorious by a score of 64-53.

From the opening tip, Chelsea looked to be in control of the game. The Hornets scored the first eight points of the game on the backs of Aaron Washington and Darrell Foster, and Montevallo looked completely out of sorts on offense. Chelsea moved from man-to-man defense to start the game into a 2-3 zone and the Bulldogs did not respond aggressively, falling behind at the end of the first quarter by a score of 12-5.

More of the same followed in the second. Behind six straight David Simpson points at the beginning of the quarter for Chelsea, the Hornets were able to stretch their lead to 18-9. Montevallo switched into a 1-3-1 zone defense that began to affect Chelsea’s offense, but two quick buckets courtesy of Foster gave the Hornets a commanding 24-11 advantage midway through the second quarter. From here the Bulldogs began to find some offensive rhythm, and used back-to-back threes from Tae´ Smith and Cortez Williamsto pull closer. A Jeremy Wilson buzzer-beating three gave Chelsea some breathing room again, and the Hornets went into the half leading 34-23.

The second half was a completely different ballgame. Montevallo came out of the gate playing more aggressive, fast paced basketball that seemed to catch Chelsea off guard. The Bulldogs ripped off an 11-2 run to start the third quarter and pulled the score to 34-36 in favor of Chelsea. Bobby Anderson and Smith battled inside with Foster for the remainder of the quarter, and a Smith jumper at the buzzer gave the Bulldogs a 43-42 advantage going into the fourth quarter.

The home crowd could smell blood, and they energized Montevallo on the way to a 17-8 run that blew the game open. The Bulldogs were able to use their athleticism and size more effectively late in the game, and got to the rim easier, where they were able to finish shots or get offensive rebounds and put-backs. Because of their strong second-half surge, they came away victorious.

Foster led the way for the Hornets with 23, while Anderson and Smith both had 16 to go along with 17 from Antwain Cunningham.

Alasha Reed of Montevallo breaks away for a lay-up against Chelsea. The Lady Bulldogs won handily, 55-23. (Reporter Photo /... read more