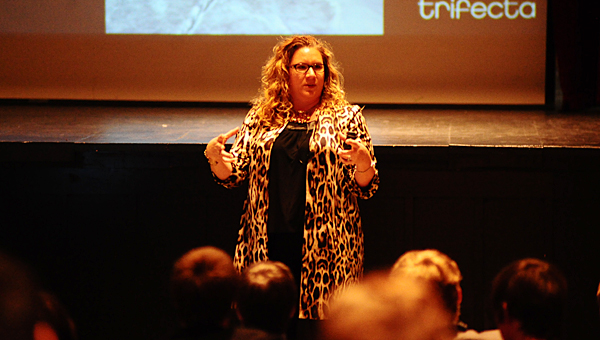 Dr. Jennifer Languell, the star of the Discovery Channel show “Project Earth,” speaks to a group of Thompson Middle School students at the school on Jan. 30. (Reporter Photo/Neal Wagner)

ALABASTER – Each Friday for the past several weeks, Brian Copes’ students at Thompson High School have watched clips from the 2008 Discovery Channel show “Project Earth.” On Jan. 30, they got a much closer look at what went into filming it.

Dr. Jennifer Languell, owner of a Florida-based green construction company and the star of the show, visited the school to speak to the group of engineering and math students.

During her visit, Languell outlined the projects she participated with while filming the show, which all dealt with engineering projects designed to slow and stop global warming.

While filming the show, Languell participated in a project to wrap a Greenland glacier in an insulating sheet to prevent melting, a project aimed at bringing algae-rich waters from the depths of the ocean to the surface to absorb carbon dioxide and a project designed to scrub carbon dioxide from Earth’s air.

Copes connected with Languell and her husband during an electric vehicle competition in 2014, and told Languell about his engineering students’ projects at THS. Copes then worked with the Discovery Channel star to schedule her visit to the Alabaster school.

“It was a blessing to have Dr. Languell here today,” Copes said. “I wanted to show them a group of students coming together as a team to identify a problem and solve it.”

While many of the show’s projects were successful, some proved disastrous.

After designing a system containing trillions of small lenses designed create a 100,000-square-mile sun shade orbiting above Earth, Languell and her team attempted to launch the system into space.

During the launch, the rocket’s engines failed and sent the payload crashing into the ground within 50 feet of a film crew, Languell said.

“They saw that things don’t always work out the first time,” Copes said.

Languell said the Greenland glacier project was the most memorable, as she and her crew spent two 10-day stints camping on the glacier’s ice field in temperatures as low as -40 degrees.

Languell’s advice for the THS students?

“Know your technical data, but also have good people skills,” she said, noting she earned her spot on the show after producers heard her at a speaking engagement.

OMES third grader Lizzie Sewell with Anna English, an Eagle Advisor and OMHS senior, during a visit from the Eagle... read more