Panthers pull out tight senior night contest in the fourth 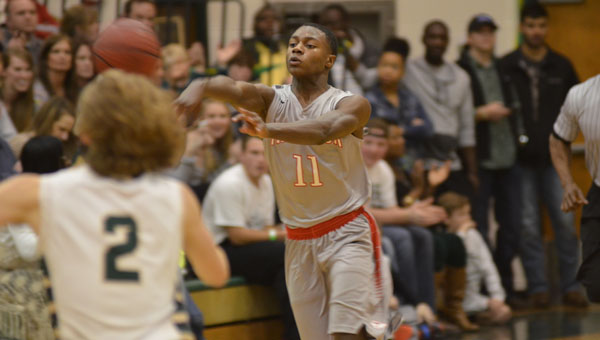 Drew Thomas of Thomspon passes up the floor during Thompsons 44-47 loss at Pelham on Jan. 30. (Reporter Photo / Baker Ellis)

PELHAM- Rivalry games are an opportunity to compete for something more than a win. They create special performances, and in some cases help cement legacies. Beating a crosstown rival gives one team and its fan base the ultimate trump card over the other until the next game. They’re the games that stick with athletes after they graduate and move on. Friday nights’ contest between Pelham and Thompson was one such game.
The Jan. 30 contest was senior night for the Panthers, and the pregame festivities included presenting Zach Allison with a commemorative basketball to honor his entrance into the 1,000 point club, which he achieved last week against Vestavia. After the celebrations were over, it was game on.
The Warriors jumped on Pelham early on their way to a 7-0 lead. Morgan Sharp and Alex Reese got Pelham on the board, but Rashad Strother and Thompson ended the first quarter up 12-6.
Strother was in a special kind of zone on this night, going 3/5 from deep in the first half on top of a tough inside bucket to finish the first half with 11. In the second Pelham began to assert some of their size on the Warriors, with Reese and JT Keeler going to work inside. During a particularly exciting stretch, Keeler threw down back-to-back dunks, the ladder of which being via an alley-oop from Allison. Strother hit a three, and Allison split a pair of free throws at the end of the second quarter to make the score 23-19 in favor of Thompson.
Reese opened the second half with back-t0-back dunks, and the tone for the second half was set. Strother connected on back-to-back threes to leave absolutely no question who was carrying the Warriors on this night. Michael Freeman of Thompson also fought valiantly inside all night to try and neutralize Reese and Keeler. The score going into the fourth quarter was all square at 33 apiece.
Strother and Blake Lewis hit a pair of buckets to give the Warriors a little cushion of a lead at 37-33, but the Panthers began to feed off the energy of the home crowd as they began to gain a head of steam. Back-to-back buckets from Pelham, followed by yet another Strother three left the Warriors up 40-37. Reese followed up Strother’s heroics with a triple of his own to tie the score up again. Four straight RJ McCall points for Pelham put the score to a point where Thompson would never be able to match again. Down 44-47 with 5.7 seconds left, Strother’s three rimmed out at the buzzer, and the home team escaped with the win in an instant classic.
Strother finished with 26 to lead all scorers, and Reese had 18 for the Panthers in the win.