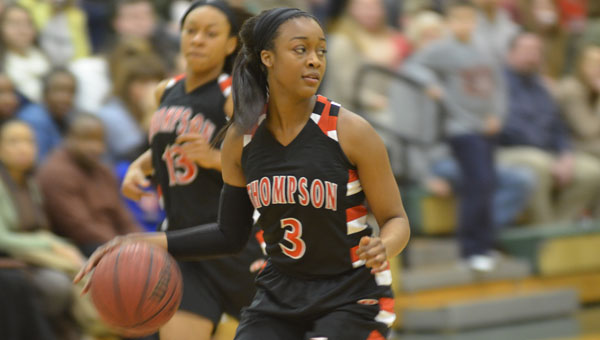 By BAKER ELLIS / Sports Reporter
PELHAM- In a game that was over seemingly from the opening tip, the Lady Warriors from Thompson handled the Pelham Lady Panthers on Pelham’s senior night easily by a final score of 58-14. Thompson, currently ranked sixth in class 7A by the ASWA, scored the opening bucket, a layup via India Cohill that also resulted in a free throw to make the score 3-0, and never looked back. The Lady Warriors kept the gas on Pelham for the entire first half as they built an insurmountable lead.
Thompson spent a good majority of the first half in a 1-3-1 zone press that Pelham simply could not break, turning the ball over a number of times early. Scoring was a family affair in the first for the Lady Warriors, as Cohill, Kelsea Bivins, Brittney Grice, Miyel Miller and Jordan Luniar all broke into the box score. The score at the end of the first quarter read Thompson-12, Pelham-0.
Pelham broke into the scoring column in the second quarter behind back-to-back buckets by Jordan Allison midway through the second quarter, however at that point the score read 18-4 in favor of Thompson. Kelsie Jacks would add another basket for the Lady Panthers in the quarter as well. Lauren Black of Thompson connected on a pair of threes in the second, including one at the buzzer to give the Lady Warriors a 31-6 advantage heading into the break.
The second half was more of the same. Thompson was able to keep their defensive intensity high and their lead intact.
“Defensively I thought we were really good tonight,” Thompson head coach Josh Golden said after the game. “I’m really proud of how we rebounded as well. This was a great final tuneup for us heading into the area tournament.”
The third and fourth quarters were more evenly paced, but the Lady Warriors were never really challenged on this night.
Scoring was even for the Lady Warriors across the board, with Bivins and Black leading the way with 12 points apiece. Erykah Hall led the way for the Lady Panthers with five.
Thompson will play Tuscaloosa County on Feb. 4 at Hoover High School in the first round of the 7A area 5 tournament.
Pelham will travel to Homewood on Feb. 3