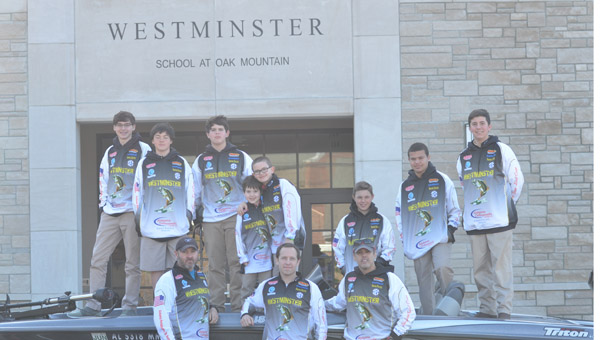 Westminster School at Oak Mountain fishing club poses in front of the school in their uniforms. The club is in their first year of competition. (Reporter Photo / Baker Ellis)

Westminster School at Oak Mountain is a self-described “classical Christian school” that was founded in 1999 and saw its first graduation class in 2006, according to the school’s website. The ideas about such an education might not necessarily bring about images of fishermen, but through the work of some motivated students, parents and faculty, fishing has become a part of the Westminster experience.

“My two oldest boys are avid bass fishermen,” Kayce Maddux, a Westminster parent, said. “We’re a tiny school, but we didn’t let that stop us from making this happen.”

Carson Maddux, an eighth grader at Westminster, is one of six students who are members of the fishing club.

One of the main attractions the Madduxes and Westminster had in starting the club was due to the very real scholarship opportunities that exist for elite high school bass fishermen.

“There are a lot of big colleges and universities that have fishing teams,” Maddux explained. “There are scholarship opportunities to be had through this for kids that can make it.”

In high school bass fishing, there are two anglers to a boat, and the boat is driven by a captain who cannot fish or assist in any way past giving verbal instruction. The captains for Westminster are usually fathers. The sport is traditionally a spring sport, and this will be Westminster’s first spring season of competition. However the club did compete in a tournament in the fall, where they placed 22nd out of roughly 140 anglers competing.

To be able to compete in events and to be recognized as a club, the school must have one of the faculty members volunteer as a sponsor. In this case that responsibility and honor falls to Jeff Chambless, a math teacher at the Upper School of Westminster.

“I’ve always loved fishing,” Chambless said. “I really just felt like this was a great opportunity for me to get involved and help out.”

Chambless went on to explain how the club does more than simply fish. The club recently volunteered at the Kampfire for the King, which was an event that took place on Nov. 14 to benefit the King’s home in Chelsea, according to Chambless. Randy Howell, who is a professional bass angler, auctions off bass fishing equipment, including a bass boat, which raises money for the King’s home.

“That event raised a significant amount of money for the King’s Home,” Chambless said.

As the inaugural Westminster fishing season officially kicks off this spring, the students will look to build on their experience in the fall and work toward a successful first year.

Vincent split a pair of games with Westminster at Oak Mountain and Altamont on Jan. 26 and 27, bringing them... read more